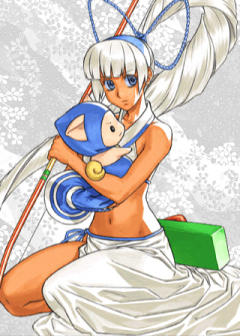 Remember when Mina was just a knowledge check that scrubs would pick because they couldn't win with anyone else, but then she sucked once you knew how to beat her? Here, she's the best character in the game.

Mina is a very competent zoner in this iteration, moreso than the mixup-based glass cannon she was in the games prior. Thanks to the reduced damage overall and her better defense modifier (though hers is still the highest) she is a lot better at taking the occasional hit, while she fares much better at close range thanks to her arrow and bow attacks being separated into command normals a la ST Dhalsim giving her more opportunities to poke and recoil cancel, as well as the addition of an aerial bow attack which she can use as another air-to-air and as a crossup. In addition to having better zoning tools, Mina can now stock up to five falling arrows and they have set positions, making her near-unblockable setups more damaging in tandem with her stronger low options. Mina can do it all.

Mina can no longer do midscreen overheads with instant air arrows, mainly because they hit mid now. How does she open the opponent up, then? Easy: zone the opponent with your various arrow normals (6A, 6B, 3A and 2C for your various anti-airs, 3B for a ground fireball, jB for a retreating poke, jA and j2S for air-to-airs etc.), chip from fullscreen with your Bow-Heart specials (41236S) and, while you've got space, shoot a few arrows up into the sky (421D). Upon calling these arrows down (421S) they will register as an overhead hit, and coupled with low options such as 2B and 3D these will not only be very hard to block but Mina can then go for another mixup, hit confirm safely with 6D into the highly-damaging 41236C or just go back to zoning. Usually because Mina has plenty of time to shoot arrows up, she can extend her pressure pretty easily with repeated arrow falls in one sequence. She can mix in crossups such as j2S and Shinabui's Grief (623S) into her pressure if needed, but otherwise the near-unblockables with arrow falls and your constant access to them means it's usually better to just go for lows and/or safe hit confirms with them out.

Mina has one of the best WFTs in the game. It's a fullscreen punish which she can not only combo from your regular punish tools (i.e. your medium bow attacks) but also from 6C which juggles now. Mina is likely to play proactively at all times with constant zoning and rushdown, so VI is a great choice for its offensive Rage gain. It grants unlimited WFT time until used, access to Mina's strong Secret Move when low on health, and some useful defensive tools to keep her out of trouble. IV gives Mina damaging combos into 41236C or WFT with Continuous Slash II, the ability to build over half a bar of Rage with Continuous Slash IV, and Rage Explosion + Issen as a last ditch option. V gives her added mobility with rolls, and she can take advantage of 6C and 2C's juggle properties for damaging, unburstable State of Nothingness combos at any range. However, V demands Mina commit to meditation when she could zone or set arrows with 421D and greatly limits her access to WFT.

Mina has new button assignments to her grounded slashes which allows you to perform bow attacks at far range and arrow attacks at close range. EX Mina, who is based on her Samurai Shodown V incarnation, uses her old inputs, which means that whether you get an arrow attack or a bow attack is dependent on proximity.

All arrow attacks are projectiles, meaning they can be reflected and cancelled out by other fireballs and an opposing Mina player's arrows. However, your opponent will not receive chip damage upon blocking them. These will not drain your Weapon Gauge if they whiff. You do not need to wait for an arrow to leave the screen before you perform another one.

Mina's jB and jC no longer hit high (jA was already a mid in V Special), so you no longer have midscreen overheads to open up the opponent with outside of falling arrows. This also applies to EX Mina. Upon firing an aerial arrow, Mina will bounce back a fair bit as she falls, and when she lands she will experience extra recovery time where she is vulnerable to throws.

Abysmal Incantation - j2D, can be done unarmed (also in EX) 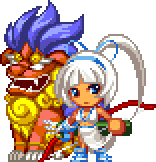