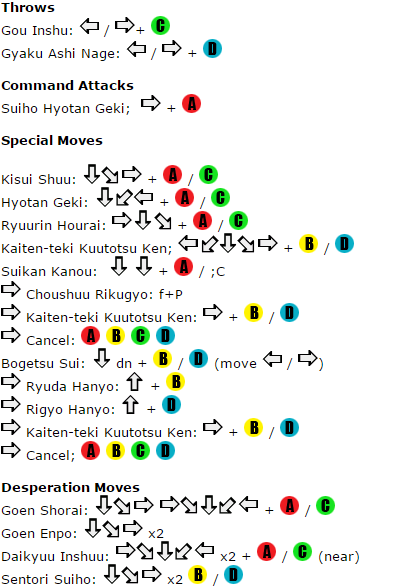 Chin is a tricky character that has slow mobility and short reach. To compensate for this, Chin has a lot of tricks up his sleeves, with two stances and a variety of mixup options when he gets close. Chin's stances allows him to fully dodge either low or high attacks, and he has a couple of forward-moving special moves out of them that can help him get in. Up close, Chin has a nice overhead, an untechable throw, a command grab DM, a nice crossup, and a good low presence, so when he gets in he can make it count. While Chin's normals have poor reach, most of them do have good hitboxes and frame data on them. Chin's combo damage is also solid, and he has access to a variety of powerful DMs that make him a lot stronger when he has access to meter.

Invitation to the Furnace: qcf,hcb+A/C

Fairly difficult, but it's good damage off an overhead confirm. Also can be used as a safe blockstring.

(j.X), cl.C, f+A, dp+C
Stronger version of the above that only works at closer ranges. Jump-in version requires a deep jump-in that leaves you close to the opponent.

King of Fighters 98 UM FE: Chin Guide by Mash It Out