The King of Fighters '98 UMFE/Heidern 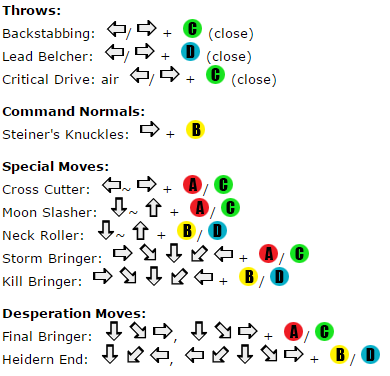 Heidern is a pretty unique character to KOF in that he's almost entirely charge-based. His moveset is geared towards zoning with big projectiles and anti-air moves to catch people trying to jump in on him. His normals are big and excellent for controlling space both on the ground and in the air. For up-close mixups, he has access to a command grab that steals health from the opponent and an overhead. He also has a command move that sends him flying into the air, which can catch people both on the ground and in the air. Additionally, he also has a DM version of it that steals health from the opponent if it hits. Heidern's biggest weakness is the lack of a good low confirm, or any low meterless low combos for that matter.

King of Fighters 98 UM FE: Heidern Guide by Mash It Out