The King of Fighters '98 UMFE/Rugal Bernstein 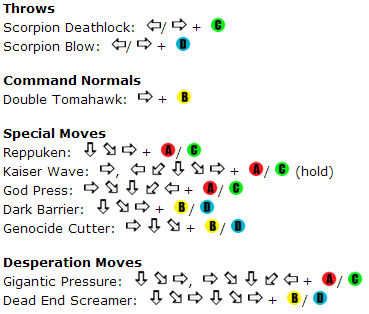 Rugal's gameplan is a mix of projectile zoning, poking, and corner pressure. For his zoning, he has a ground-travelling projectile, a big super projectile that he can use to destroy other fireballs, and a fireball reflector move he can use to counterzone as well. He also has a nice selection of big normals poke and control space with. To complement his zoning game, Rugal has a pretty solid DP that works both as a reversal and anti-air. Rugal is unique in that his main combo special will carry the opponent to the corner, so he gets to spend a lot more time with the opponent cornered than other characters. Up close, he has access to some nice low blockstrings, an untechable hold throw, and some good jump-ins. Rugal's main weaknesses are that he doesn't have great buttons to stop hops, and no great air-to-airs either.

st.C, qcf,hcb+A/C
Rugal's far heavy confirm. Really good as poke pressure, but not if they get hit out of the air.

f+B, AB, qcf,hcb+A/C:
Note that this requires you to be close to the opponent to work as intended.

Rugal's most damaging combo by far, can work from a cross up j.B or j.D and sometimes non cross up jump ins based on spacing. The cl.A can be substituted for a cl.B or another cr.B if too far away for cl.A, but cl.A does the most damage of all 3 options. Mid/Jump-In

King of Fighters 98 UM FE: Rugal Guide by Mash It Out