Difference between revisions of "The King of Fighters XV/Haohmaru" 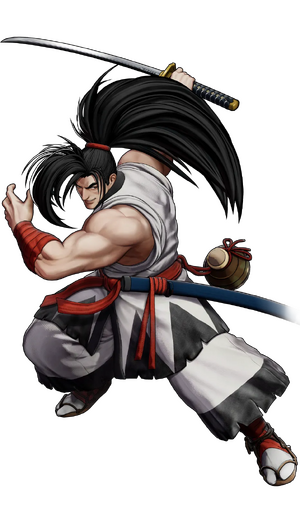 Haohmaru is a traveling swordsman determined to master the way of the sword. He is a bold and free-spirited fighter who hates cowardice, and travels from country to country, sake in hand, in search of a match with anyone who can put up a real fight.
In order to help his friend Nakoruru, and to fight with new and formidable opponents, he travels far beyond time and space and lands on the KOF stage.

Flame of the Conqueror -

After nearly 30 years of being denied entry into the KoF franchise due to canonical issues, Haohmaru finally makes his playable debut in The King of Fighters XV, in one of his best iterations so far. Haohmaru has plenty of tools at his disposal that he can use to open up the opponent, no matter the cost.

Being a swordfighter, Haohmaru is a bit on the slow side, but when he hits, he hits very hard. Haohmaru is one of, if not the only character in the game capable of doing 500 damage or more with just a single bar of meter from anywhere on the screen, without counterhits. He even has his far standing heavy slash (named Iron Flash in this game) as a command normal that does 180 damage, making it one of the most damaging pokes in the game.

Haohmaru is also good at playing defense. His st.A, j.D, j.CD, and heavy punch attacks are all sword based and have a long reach, allowing Haohmaru to poke the opponent from afar. Like in his home series, Haohmaru has an enhanced version of his DP if he performs it while running, which not only starts up faster and moves him further, but is the most damaging DP in the game, doing even more damage than Omega Rugal's legendary Genocide Cutter.

However, Haohmaru comes from a game where the rules aren't the same, and his tools have been modified to compensate. Most notably, his sword attacks have massive hurtboxes, and Haohmaru players can easily be counterpoked if they're not careful. That isn't to say Haohmaru is already really slow compared to the rest of the cast. Many of Haohmaru's specials start up too slowly to combo from light normals, and many of Haohmaru's best buttons aren't as fast compared to others in KoF XV's cast, so he'll more often be playing defensively than offensively.

If you like samurai characters or want to be able to turtle and then obliterate your opponent after finally getting a good opening, then Haohmaru might be your character.

Flame of the Conqueror