Difference between revisions of "The King of Fighters XV/K'" 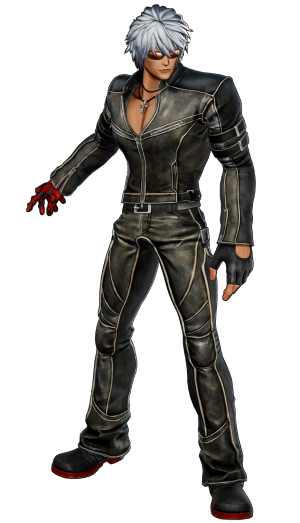 K' is a cybernetically modified human with genes transplanted from Kyo Kusanagi by the secret organization NESTS.
He wields the ability to manipulate fire, a power he controls with his right-hand glove.

K' (pronounced "kay dash") is one of the truest examples of an all-rounder in KOF, and as a result makes himself comfortable in the hands of both beginners and veterans alike. Specifically, K's gameplan revolves around constantly repping his extremely versatile special move, Ein Trigger, and acting accordingly with the move's various different follow-ups. Thanks to these follow-ups, Ein Trigger can be used to poke, counterpoke, tie together combo routes for big damage, zone the opponent out, or even just be whiffed to build meter while still being able to provoke reactions and respond with any of its myriad of options. Of course K' also has many other moves, such as his Crow Bite DP (623A/C) as an invincible reversal and his Blackout special (236B/D) as a tricky movement option, to mix up the open-endedness of his gameplay even more. Smart usage of K's variety of tools will result in him being able to shine in whatever way you may choose to play him.

One extra detail should be noted about K', which has always been the case with him in every game: optimizing this character takes some work. His optimal combos and conversions can take a good amount of hit-confirming skill and physical execution, and should be noted for anyone looking to master the character, as dropping his better combos can cost you precious meter and also put you in a bad spot to get punished.