The King of Fighters XV/Krohnen 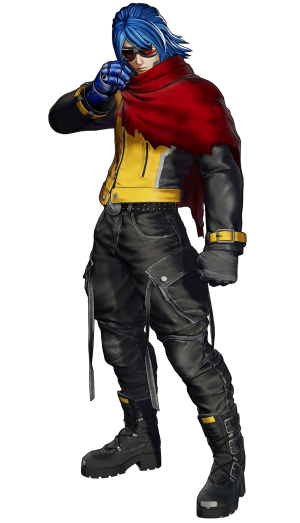 A mysterious young man who teamed up with Ángel this KOF. His goggles and mantle compose his trademark design, and he fights foes with his transforming arm.
Unknown to most, however, is that he is actually NESTS' 9999th "perfected" clone of Kyo Kusanagi. Formerly known as K9999, he has adopted a new identity in an effort to hide himself.

(Hold OK) = Can hold down input briefly before releasing.

As it stands, while the inputs for Krohnen's SDMs have been simplified, it's still possible to do the classic inputs for K9999's/Nameless' old supers. By doing Infernal Prominence as

, the move will be performed as per usual. The same also goes for Fusion Blaster as well. Calamity Overdrive can also be done as

like with K9999's and Nameless' SDMs back in Vanilla '02 and UM, respectively. These alternative inputs don't affect the properties of these moves in any way and are just there as a fun Easter Egg.