Difference between revisions of "The King of Fighters XV/Ryo Sakazaki" 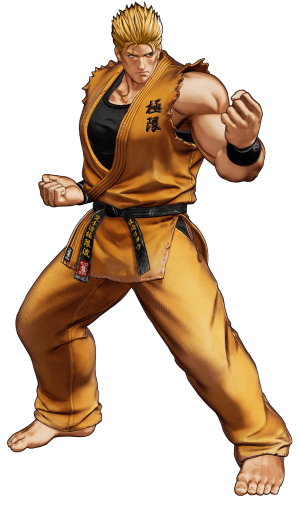 Ryo is the son and entrusted owner of Takuma Sakazaki's dojos for the Kyokugenryu school of Karate. As a child, Ryo spent his time training his body and eventually became so powerful that he was nicknamed The Invincible Dragon.
Naturally, he is extremely strong-willed and will spare no effort getting things done. Even to this day, he continues to train himself to his maximum potential.

Ryo has the essence and hallmarks of a classic shoto, but lacks the proper zoning tools such as a meterless fireball, making him more of a rushdown character. Ryo has long been considered a "moving fortress" due to his defensive tools, including: a reversal DP; a parry for highs and mids, and a parry for lows that he can use to extend pressure; and his 236P that serves as a large poke instead of being a fireball. Ryo also has a suite of excellent normals that allow him to maintain a close range presence; his CD and cr.D are whiff-cancelable, his j.CD has excellent range, his cr.A links into cr.C up close, and many of his light normals are either plus or slightly negative on block.

That isn't to say Ryo doesn't have his flaws, though. For a shoto or a rushdown character, Ryo is surprisingly slow, which means any holes in a Ryo player's gameplan can easily be exploited. If you want a character with notable defensive tools without sacrificing damage or pressure, then Ryo might be the pick for you. Ryo is best played in the mid or anchor position, as having meter makes Ryo significantly more threatening.