The King of Fighters XI/Momoko

From Dream Cancel Wiki
< The King of Fighters XI(Redirected from Momoko (KOF:XI))
Jump to navigation Jump to search 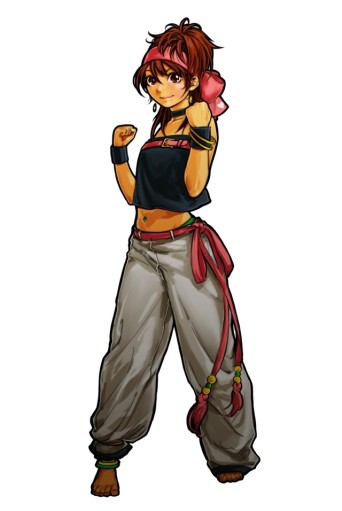 Momoko is one of the hardest characters you can play in Kof XI. On a scale of 1 to 5, I'd rate her as a definate five. If you want to play her effectivly, a lot of practice time is going to have to be sacrificed.

Momoko has a very small profile, so she can duck under most fireballs and standing attacks, but that also means that her range is SHOT.

Back or foward near opponent + C/D - Iyan

Segunda Pula is a double jump.

Fumi Atakki is a hop attack on the opponent. D version propels you from the enemy, as B doesn't. Can be used infinitely if in the corner, until your opponent gets smart and rolls. A good strat for this one would be Three B versions into a D version, land into a qcb+D

Ai Pachidou is Momoko's main String starter. It comes out slow, so either do it far away from the opponent, or do it as they get up. Never use this as a wakeup. Cannot be combo'd into.

Autoshu Taru is a grab. If the previous attack was blocked, it'll whiff. Momoko's main string finisher. Always use this for guaranteed damage.

Pheonix Arrow's B version is just the roll attack. The D version has a trip added on at the end. Always use the D version, as the attack is safe to use whenever, and you recover fast enough to not be hit by anything. This attack is VERY SAFE. Whore this move as much as you can.

Small Attack is a three-part butt bump. Think of it as Iori's qcb+P. Slow to come out with too much recovery time.

Her grab DM puts the opponent into a juggle state. Can be DCed into her LDM.

Be aware that only a couple of Momoko's String DMs combo. Most others can be tech-rolled or counter-hit out of. On the other hand, these strings are really hard to block if you don't know whats coming, so a blunt DoReMi DM has a good chance of hitting the opponent one way or another.

Esper takes about 2 seconds to charge, but is an unblockable beam that does great damage, even when DCed into it. Opponents CAN roll or jump over it, and it hits once if I'm not mistaken.

Momoko's main strategy is to keep pressure on an opponent, while mixing up her strings and command moves to keep the other opponent guessing. Never do the same thing twice in a row, but use what you need to in order to win.