The King of Fighters XIII/Ralf Jones 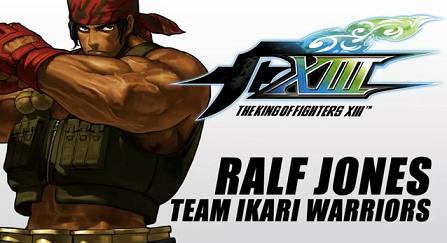 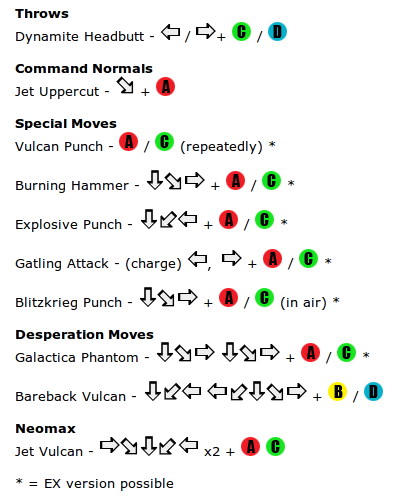 st. C: 80 damage, hits mid. Great long-range poke. Very useful for zoning, but can whiff on some crouching opponents. Can be whiff cancelled into his Vulcan Punch to increase it's range

st. D: 80 damage, hits mid. Another long-range poke. It's not quite as fast as st.C, but it's still very useful.

cl. C: 40+38 damage, cancel-able on first hit only, hits mid. This is Ralf's primary combo starter. Often followed up with his C Burning Hammer. Alternatively, Jet Uppercut can be used to hit-confirm combos.

cl. D: 70 damage, cancel-able, hits mid. Decent damage, but not quite as fast as cl.C. It also causes more knockback than cl.C, making some follow-ups whiff. Aside from those two (notable) drawbacks, it can be used as a substitute to cl.C in many combos.

cr. A: 25 damage, cancel-able and chainable, hits mid. Similar in horizontal range to his stand A, good for pressure in close range.

cr. B: 30 damage, cancel-able, hits low. A quick attack often used to start combos. At close range, it can be combo-ed into df+A or linked to cl.C.

cr. C: 70 damage, cancel-able, hits mid. Awesome. This is Ralf's only long-range cancel-able move, so it really is the backbone of a lot of his damage. It is often used after Burning Hammer and cancelled into either Gatling Attack or a DM.

j. C: 72 (70) damage, hits overhead. An elbow drop with a good amount of hitstun. This is a good for jump-ins if Ralf is approaching from above.

j. D: 70(68) damage, hits overhead. A kick aimed downward. This is the preferred jump-in option is Ralf is approaching from further away. This jump kick has a really deep angled hitbox which can used to instant overhead crouching opponents.

CD: 75 damage, (whiff) cancel-able, hits mid. Excellent CD. It has great range and moves Ralf forward. On counter hit, it can combo into either of Ralf's DMs (or NeoMax). More often, it's whiff canceled into Burning Hammer (to keep advancing) or Explosive Punch (to keep Ralf safe).

Dynamite Headbutt = (b/f+C/D): 100 damage, can be broken. Causes soft knockdown. Pretty standard throw, which leaves the opponent at a neutral distance from Ralf.

Vulcan Punch = (P repeatedly) - Ralf delivers a volley of explosive punches. Any punch will knock the opponent away, so you're unlikely to ever connect more than one of them at a time. (On counter hit, two.) The minimum number of punches is four, and there is no difference between the A and C versions. New to the console version is the ability to move forward while performing this move. It can be canceled into from any normal. Because of this, it has some use as an anti-air move if canceled into from a long-range normal.

(EX) = (AC repeatedly) - Unlike the normal version, this can hit multiple times (usually three midscreen and four in the corner). In the corner, it can be drive or super canceled into longer combos. Still very few situations where this move is recommended.

Burning Hammer = (qcf+P) - A quick, explosive punch to the gut. A version is quicker, more damaging and Ralf recovers quicker. The C version stuns the opponent long enough to allow Ralf to follow-up with a normal, Gatling Attack or DM. As such, it forms the heart of most of Ralf's combos.

(EX) = qcf+AC - This version has full-body autoguard, making is work like a counter move. On hit, it puts the opponent in a crumple state. The next hit will knock the opponent down, so the best follow-up is a DM. Best meterless option is C Burning Hammer into C Gatling Attack. This isn't used in combos much, but it can be comboed into from cl.C or D.

Explosive Punch = (qcb+P) - Ralf pounds the ground, causing a mushroom cloud explosion around him. A version is fast, but the hitbox is extremely small. Some like to use it for the meter gain. C version is larger, and a decent (if slightly slow) anti-air. Be advised that the hitbox on the C version is still smaller than the explosion itself. Ralf is completely covered during the explosion and you can sneak in an attack before it clears. Often st.C or D are used to make sure opponents can't get in to punish him. C version can also be used in the corner to juggle opponents. Both version can nullify projectiles.

Gatling Attack = (b~f+P) - Ralf charges forward with a backhand, and follows up with Burning Hammer (A version), Jet Upper (C version) or Vulcan Punch into Jet Upper (EX version). The A version doesn't knock down, so it is useful for DC and HD combos. From a distance, it's also safe on block. The C version is stronger, making it a better choice if you lack meter. In the corner, it can be drive cancelled into Explosive Punch to juggle the opponent.

(EX) = b~f+AC - In addition to being faster and more damaging, the EX version ends in a hard knockdown. While it's not a bad special, it doesn't lead into any bigger damage. Most Ralf players end up saving their meter for other moves.

Blitzkrieg Punch = (qcf+P) in air - Ralf dive bombs the opponent. This overhead attack is great for pressuring opponents and players have been known to abuse it. After hitting the ground, Ralf bounces far enough back to avoid most punishment. It can be Drive and Super cancelled, and only if the move connects with the opponent's toes is it possible to combo from it. This is nearly impossible to hit-confirm, however. Typically, a successful hit causes a hard knockdown. Can be canceled into from j.A and j.CD, but neither combos.

(EX) = qcf+AC in air - EX version is faster, more damaging and has some invincibility.

Galactica Phantom = (qcfx2+P) - Ralf hits the opponent with an explosive punch. This move can be charged for increased damage. Fully charged (about four seconds), it is also unblockable. Galactica Phantom can travel through projectiles and other attacks, making it a useful punish.

(EX) = qcfx2+AC - The EX version does much more damage and travels a bit further.

Jet Vulcan = (hcbx2+AC) - Ralf explodes in a flurry of punches, after which he goes into a "cool down" pose. Outside of combos, this move does 94 hits and 486 damage. Standalone, this move has some utility as an anti-air since it sucks the opponent in and will always do the full number of hits (like Ryo's Zanretsuken). However, it's much more advisable to use this as an ending to HD combos. Since EX GP suffers a lot from damage scaling, this will always be Ralf's best finisher.

Yamamoto – Ralph=power is the simple equation we used here. The centerpiece being his chargeable Galactica Phantom. Damage increases as charge levels go up, release it earlier to improve damage with a super cancel. It’s nostalgic that he can move again during his Vulcan Punch.