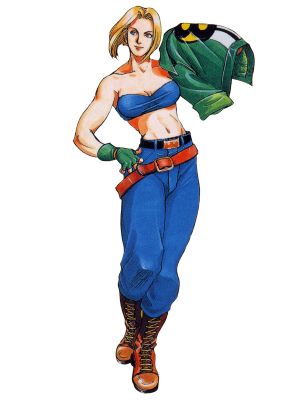 Blue Mary's gameplay style revolves around high risk/high reward. She can pressure opponents well with her guessing games. Her Double Rolling is a great attack that can setup her damage and guessing games, the follow-up third hit to Double Rolling can be canceled into M.Snatcher, which deals pretty good damage, almost half a lifebar. She is also able to cancel the follow-up into Young Dive, which is where Mary's guessing games begin. From Young Dive you can perform M.Spider, an unblockable that grabs standing opponent and possesses some invulnerability frames, or she can perform the Reverse Kick, a simple turn-around jump kick, effectively allowing Mary to cross-up her opponent. The M.Spider can also be performed outside of the Young Dive, it can be executed very low to the ground by Tiger Knee'ing the command. Her Desperation Move/S-Power, M.Typhoon, is an unblockable that travels a mid-screen distance with a bit of start-up time. This move occasionally works when thrown out when least expected, but one of it's most prominent uses is during an untechable knockdown and kara-canceled into from Mary's f + B overheard. If your opponent tries to block the f + B overhead and you kara into M.Typhoon, they will be the guarding state while you roll out with M.Typhoon.

Finally, using Mary's Super Desperation Move/P-Power, Escalation, she becomes a force to be reckon with by gaining several new attacks, Vertical Arrow (dp + A), Straight Slicer (Charge b, then f + A) and Spin Fall (qcf + C). Each chain into certain specials, for example -

Each of her new attacks chains into a different special and can be ended with the Dynamite Swing finisher for big damage. Also note that Vertical Arrow is an instant overhead, which you can cancel into from a cr.B, giving Mary an extremely difficult to block attack!

Learn to abuse Mary's offensive mix-ups and mind games, she is great at harassing opponents that love to turtle or charge in recklessly.