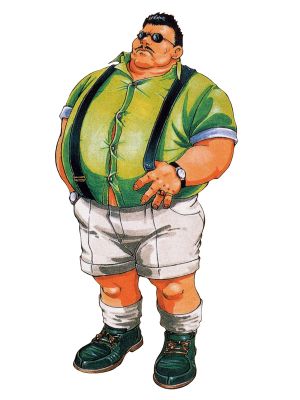 A business man who loves eating and was considered part of the Big Three alongside Geese Howard and Jeff Bogard, can't say if that holds up currently.

Gameplay wise, Cheng is a very unorthodox, semi-joke character. He has many gimmicks with his command normals and even Sideline attacks, but that doesn't mean he is only tricks. He has genuinely good zoning and set-play with his energy balls, a good far reaching attack with his [4]6B/C that is also a great breakshot, and decent damage when the situation calls for it, He can be very hard to pin down, specially if the Cheng player knows how to trick their opponent. His P-Power can be hard to do in a combo, but it's safe if blocked and you are able to link afterwards

Sadly, Cheng has among the shortest range in the game, and doesn't have the rushdown capabilities to compensate, so an opponent with a lifelead can feasibly lame him out. His combos require you to have charge already, and his non-sweep low, 2B, can't be chained again, so cancelling into 4[6]B to get a low combo is a hard read rather than a confirm. He lacks any real mix-up and his buttons with + frames are short, so his pressure is lackluster. His S-Power is the worst in the game, so you are stuck with using meter for Breakshots and P-Power.

Cheng can easily keep the lead in a match just as easy as his opponent can keep theirs, so playing Cheng requires knowing to take advantage as possible and being as unpredictable as you can be. He is considered Bottom 1 in most tiers but that doesn't mean you can't make good use of him.