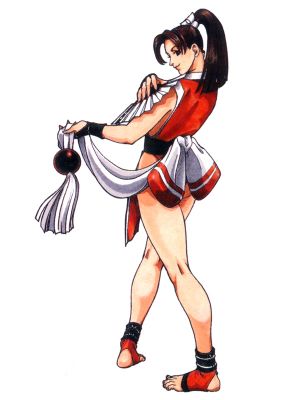 Mai is a well rounded character that has lost some of her pressure and combo options from Real Bout Special in exchange of a more defensive oriented playstyle on neutral. Her basic gameplan of zoning with Ka Cho Sen (236A/C) and Night Bird (214C) to anti air, can make her seem like a traditional shoto, but she has more movement and aerial options at the cost of the range in her pokes. She also has a triangle jump and an air throw to make her jumps trickier to stop, and a get-up attack to push opponents away. If played well, Mai can feel unapproachable, while still having very decent pressure thanks to her 18f feint.

However, as said previously, Mai often needs to put herself at risk if she wants to compete at the mid-range, with a risky Ryu Enbu (214A) or counterpoking. Her damage can be good up close, but she struggles to make good reward or her zoning and long range buttons when compared to other characters, making her gameplan inherently risky.

If you like characters with good movement, and both fullscreen and close quarters options, Mai may be just for you.