The King of Fighters XI/Shen Woo

From Dream Cancel Wiki
< The King of Fighters XI(Redirected from Shen Woo (KOF:XI))
Jump to navigation Jump to search 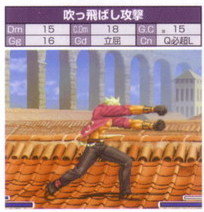 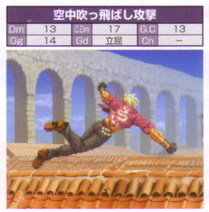 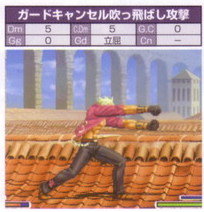 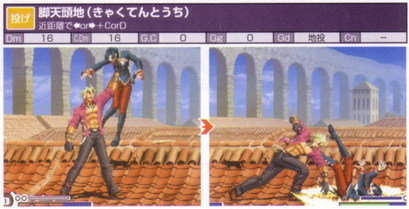 Kyakuten Touchi - Near opponent, press back or forward + C or D 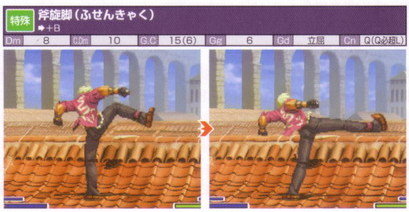 Shen kicks forward by thrusting his foot forward. If used by itself, it can only chain into the Fusen Gowan Ken. If canceled from a normal, it can combo into many of his specials and DMs. A very important move. 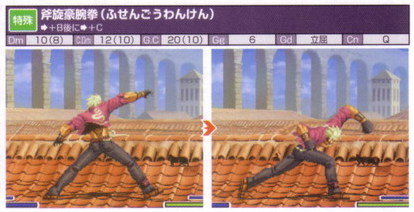 Koukuzure Geki - Near opponent, hcb, forward + A or C (SC)

Shen gives himself a boost in attack damage, usually lasting around 8 seconds. The properties of this move differ vastly depending on whether it was used by itself or super/dreamcancelled.

Stand-Alone: Shen takes a full second to power himself up, during which he is fully invulnerable to anything, including normal and special throws. Also, the pillar of energy he summons can hit the opponent, doing roughly 50% damage, 80% counter-hit.

Super/Dreamcancelled: Shen skips the power-up and goes right into the activation. This also recovers so quickly that it can usually be followed up into his ground B'n'B.

Does a good chunk of damage and isn't that unsafe on block.

His qcfx2+A/C counter wires, so various followups are possible, including the Shen Woo combo of doom:

Takes fives power stocks and two skill stocks, so don't think you'll ever land it, even in casuals. It looks DAMN cool though.

Shen is an interesting character. His moves do good damage, but many of them are also very safe on block. He has two main disadvantages that he must work around:

1. Shen requires a lot of both Skill and Power stocks to do much. His meter B'n'B's require supercancelling, and his supers are a large part of his game. His Tatsu! Geki Ken makes him 5x more fearsome from a distance, as one misplaced air attack/projectile can have the opponent get smacked in the face.

2. Linearity. Shen's only long-range option without meter is his Geki-Ken, he lacks a speedy reversal, and his only good anti-airs are short range normals, i.e. his crouching C and far D. In other words, Shen is a very straightforward character that requires the player to constantly be on the offense.

Shen has an above-average mixup game with his crouching D, which has good range and knocks down, his command throw, which can be supercancelled, and his qcb+A, qcf+A, which... well, it's an overhead, and it knocks down. He also has a lot of safe moves, close C, f+B, f+C is a fantastic blockstring because his close C starts very fast and f+C leaves you at an advantage, at which point you mix it up. His qcf+A can also be used for pressuring at the right distance.

This combo now works. In KOF 2003, it only works if the Jumping attack crossed up.

This combo also works. In KOF 2003, the DM always misses due to lack of reach except when this combo is performed on an opponents back (i.e hitting their backs instead of hitting of their usual front)