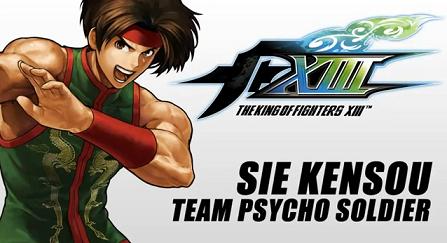 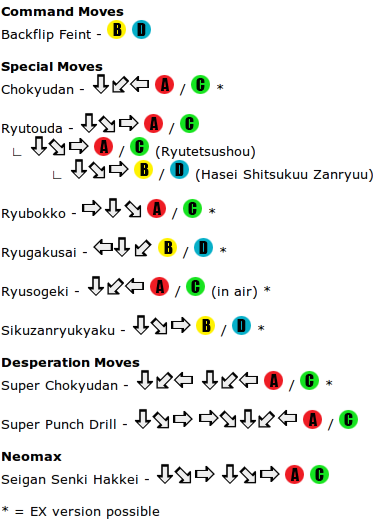 Producer Yamamoto says: "Aside from being a good way to disrupt guard, his punch super can be used effectively to catch opponents who roll past his fb. His fb game has improved and can be used as a central strategy now that the recovery is better. His air qcb.P can be cancelled with any special and the new s.B>C target combo can be linked by following with c.B or s.D. I recommend using these changes aggressively along with his fb whilst minding distances."

Kensou is a somewhat different beast, especially now in Console XIII. He a character that is not a master of any discipline but can really hold his own in any. He's a very capable zoner and has the ability to rushdown and pressure well, however his stubby normals and the fact that people can start negating his zoning once meter is gained really hammer home the point that he is not meant to excel in any particular area. Success with Kensou is achieved by knowing when to enact a rushdown or zoning style and when to incorporate his normals and moves that have their specific niches.

s.A: 25 damage, cancel-able/chain-able, hits mid. Kensou throws a short jab. It's not a terribly decent move, it's not very good at a st.A's usual niche as a hop check. It hits crouching opponents and you can use it somewhat with cl.C as a frame trap but confirming would be difficult.

s.B: 30 damage, cancel-able, hits low. A very solid move. As you can see, hits low and it can go into his st.B, st.C target combo which can eventually hit-confirm into Rekkas or his DP. Range is also not bad for a st.B. You can also cancel into specials out of it, but you probably won't use it much for that.

s.C: 80 damage, hits mid. Second part of his target combo, Kensou throws an overhand punch. Despite the animation, it's not an overhead. Outside of the Target Combo there's very little use for this move. At the activation range this comes out in, Kensou will be too far away to link anything afterwards. Not cancel-able into anything but HD, this makes it a very mediocre move outside of his Target Combo. Avoid usage.

s.D: 70 damage, cancel-able, hits mid. Outside of his DP's, probably Kensou's best anti-air. Kensou kicks the air in front of him. Unlike most, Kensou does not have a separate close or far.D move so this activates from any range. Great vertical range with the ability to cancel into specials, most notably his backflip and fireball. It lacks a bit of horizontal range so be careful of whiffing the move, but it is also whiff cancel-able so you can make it somewhat safer than other whiffed normals.

cl.C: 70 damage, cancel-able, hits mid. Kensou throws a stiff chest/gut check. It's a quick move, good for punishing. Other than that, there's not a ton of use for it since due to the absence of a command normal, hit-confirming off of it isn't the easiest thing. Save for punishes and option-selects with throw.

cr. A: 25 damage, cancel-able & chain-able, hits mid. Kensou flicks his fist in front of him. A much better check against hops than his st. A, this fills up that niche decently. Quick to come out and defends the area in front of him. This is the only usage of it though.

cr. B: 30 damage, cancel-able & chain-able, hits low. Arguably Kensou's best poke, a very quick low that's cancel-able into anything. Chaining this into itself is going to be your best hit-confirm along with your Target Combo linking into this. The range isn't that impressive, but it gets the job done. You'll be hitting this button a ton within a match.

cr. C: 70 damage, cancel-able, hits mid. Kensou's second best Normal Anti-Air. He throws both hands out in front of his head at an angle. A bit better of a horizontal Anti-Air than st.D but serves around the same niche.

cr. D: 80 damage, cancel-able, hits low. Kensou's sweep. Amazing poke, good range, special cancel-able which makes it deceptively safe thanks to his fireball and backflip. Thanks to his tools, this is one of the better sweeps in the game.

j. A: 45 (40) damage, cancel-able, hits overhead. Kensou thrusts a palm at a downward angle. This is his best vertical hop-in move. You can also hit it decently high and still combo after it. Also if spaced perfectly, it can even crossup the opponent, and the setups for doing so aren't too difficult. Solid air normal.

j. B: 45 (40) damage, cancel-able, hits overhead. Kensou sticks his leg out like a flying kick. One of his two good air-to-airs. Comes out quick and has a solid horizontal range, letting it snipe the opponent before they can stick out a normal. It's not a bad air-to-ground move either, it hits crouching opponents and has a better crossup hitbox than j.A and is much easier to set up in order to crossup.

j. C: 72 (70) damage, cancel-able, hits overhead. Kensou leans into a flying elbow. It's not a terrible move, it's a decent air-to-ground, however Kensou's hurtbox comes lower than it so it might be a problem. It also has the ability to crossup if done very, very late. Its active frames are not great.

j. D: 70 (68) damage, hits overhead. Pretty much Kensou's st.D but in the air. His other good air-to-air, but for different reasons. This will beat out almost anything the opponent throws at Kensou if he's above him. Along with j.B, this makes him very annoying to deal with in the air. And, another note, like the rest of his air normals, j.D can ALSO crossup, but again, has to be done relatively late and you'll probably never use this as an air-to-ground so it's more for novelty.

CD: 75 damage, cancel-able, hits mid. Kensou thrusts his fists out in front of him as he takes a forward step. Not the greatest CD to write home about, but it has one good advantage. Kensou can take advantage of the great forward motion and whiff cancel it to gain ground. Can make pinpointing him very tricky. Won't use it often but it's good to keep in mind.

j. CD: 90 (80) cancel-able, hits mid. Kensou does an arching kick. It's a solid air-to-ground j.CD. Good angle and the active frames are EXTREMELY deceptive. The opponent can still get hit for a bit after the animation ends. And of course, being a Kensou air normal, it crosses up though it's the hardest one to get to do so, and since it has to to be done so late, it defeats the purpose.

Chokyudan = (qcb+P) - Electrified ball of Psycho Energy. A has quicker recovery and goes slower across the screen. C goes faster and has longer recovery.

(EX) = qcb+AC - Much faster version with more durability and damage.

Ryubokko = (dp+P, [P]) - A Rapid String of punches that can be mashed for more hits/damage.

(EX) = qcb+AC in air - Kensou's Dive Bomb now does multiple hits on the opponent and keeps them standing instead of causing a Soft Knockdown.

Sikuzanryukyaku = (qcf+K) - Kensou runs forward and when close enough to the opponent, he jumps and kicks him in the face. Button determines the distance he runs.

(EX) = qcf+BD Kensou immediately leaps forward and does the kick from a good length away.

Super Chokyudan = (qcbx2+P) - Kensou fires a huge Chokyuudan forward. Button strength determines the speed of the projectile. A is slow, C is fast.

Super Punch Drill = (qcf~hcb+P) - Kensou does a quick palm strike in front of him breaking his opponent's guard, then ravages the opponent with 50 punches, the last sending him flying.

Seigan Senki Hakkei = (qcfx2+AC) - Kensou gathers his energy then fires a big electric buzzsaw right next to him.

No Stock, No Drive

No Stock, No Drive Gauge 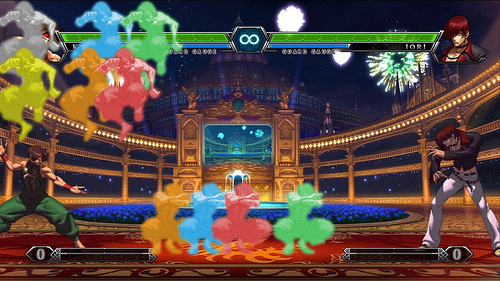 The forward moving jumps/hops display one image at the apex of the jump and one at the landing point.