The King of Fighters '98 UMFE/EX Kyo 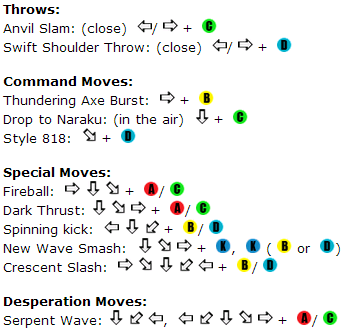 EX Kyo is a balanced fighter that has tools to fight at all ranges. In neutral, he has access to a grounded projectile, a good 623, and a super backdash, alongside some decent pokes for controlling space with. Up close, he has an excellent pressure tool in his air command normal that allows for strong blockstrings and also works as a good crossup. His combo game from heavies is excellent due to his special launcher and his multiple hard knockdown finishers. He also benefits from cornering the opponent, as he gets access to more damaging corner combos. His main weakness is his pretty weak low confirm options.

2B, 2A, 421D
Basic low confirm into hard knockdown. Has good corner carry.

At or Approaching Corner

The second button press of 236D,D must be delayed as late as possible to get SDM 2141236P to hit only twice.

King of Fighters 98 UM FE: EX Kyo Guide by Mash It Out

(2:35) Shows the difference between regular and EX Kyo's hitboxes on 623. It seems no other hitboxes differ between the two.