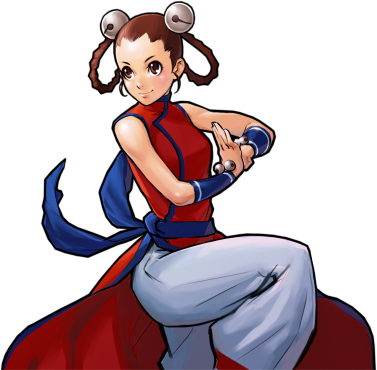 Note: Remember to only use one cr.A after a front jump-in.

Your bread and butter both as a combo and as a blockstring. 18%.

You need a cross-up for Xiangfei to get both hits out of dp+B, dp+D preferred if you can confirm it. 25-27%.

Pressing A along with B/D increases dp+K's damage by about 5%. It's recommended that you press AD(or ABCD) to avoid a roll cancel and dp+AB's first hit whiffing off a front jump-in. 31%.

Great corner combo that ends in a reset.

Adding a jump-in here is very specific. Not a good combo altogether, st.D is best kept after a meaty qcf+A.

Depending on timing the second hit of the super may land or whiff, make sure to always do the third one fast to get the combo regardless. This combo is good for confirming. 30-39%

It's easier to add a cross-up rather than a front jump-in to this combo. 34%.

Very consistent for the damage you get out of it. 45%.

Neat overhead/low starter that goes into command grab DM. You can use df+Dfor a faster low but it's much more strict with the timing of the max cancel to avoid a button. 33%-37%

The SDM version being 1 frame makes this combo possible. It's easier to add a cross-up rather than a front jump-in to this combo. 50%.

Not enough more than the 2 stocks version to warrant the extra meter but good to know if that one would miss the kill by a hair. 60%.