The King of Fighters 2002 UM/Miscellaneous

Due to how their hurtboxes move, a number of combos are inconsistent on these characters. Ex characters behave the same as the regular version. Said combos will have a note linking to here, so make sure you understand that your combo may whiff or become inconsistent on:

A few more characters add themselves to the list depending on if they're crouching or standing:

If Robert, Bao or Shermie are mentioned on top of the link to here then it doesn't work on them altogether, standing or crouching.
The st.Kyo-tier refers to the first 5 characters, from Kyo to Shingo, st.Kyo_Name-tier means to add Nameless, thus first 6 characters and st.Kyo_Jhun-tier refers to the first 7, from Kyo to Jhun. When they are standing, some things miss on them only by a hair so making sure you're point-blank or close to the corner can be enough to get the combo to land properly on them standing. If mentioned under the combo then it's the case.
Keep this in mind and you can safely go for the extra hits or better damage on your specific combos.

There are two main types of knockdowns, soft and hard and while not being necessary knowledge at entry-level knowing which will happen affects how good players decide their oki, mix-ups and sometimes even conversions when it comes to OTGs. One thing common to both knockdown is that as long as the opponent does fall on the ground, no recovery roll, then they get 8f of throw invincibility upon waking up.

By far the most common type of knockdown, every cr.D and almost every C throw, st.CD, and j.CD will lead to it. Most specials will as well.
The important thing to note is the opponent can use a recovery roll to deny the knockdown and get back in the game faster at the cost of losing the wake-up throw invincibility they'd have had on wake-up.

The big selling point of hard knockdowns is that the opponent cannot tech it with a recovery roll. Once they get hit the player has all the leeway to execute whatever oki or mix-ups they practiced in the training room without having to pay attention to the opponent using a recovery roll or not. For this reason alone, hard knockdowns are very valuable at good to high levels of play and are often preferred to a slightly more damaging but soft knockdown option.

It's possible to identify the different knockdowns thanks to watching the opponent falling or using the training menu guard option set to down that will make the dummy tech every soft knockdown.

SKD VS HKD by Franck Frost

A juggle can refer to hitting an airborne opponent, or to the situation where hitting an airborne opponent is possible, or even to creating said situation; it's simply an umbrella term used to discuss those things. For obvious reasons, juggles are generally limited in fighting games in various ways.
In KoF, one way is that most launchers can only be used once within a combo to avoid restarting the juggle easily. It's sometimes mechanically restricted by having the launcher whiff the second time or artificially by making the move too slow for it to have a chance to connect. Another way is by making use of juggle states.

In simple terms, a juggle state simply describes the restrictions in order to hit the airborne opponent. It then extends to finding what moves cause what kinds of juggle state. The juggle states in KoF are:

A counter hit will move a juggle state up a rank. No juggle to Half juggle; Half to Full and Full would remain Full. The most common application of this is getting a j.CD counter hit into another j.CD. Note that Kasumi, Angel, Yamazaki, May Lee and much less often Yuri are all characters that when hit airborne may sometimes enter a different juggle state than normal. It can make the combo longer or easier, usually Yamazaki or May Lee, or make it drop, forcing the player to adapt or give up his route, usually Angel.

These are moves that disregard the juggle state of the airborne opponent to hit them anyway. A good example is Kasumi's qcfx2+AC that she can use off a st.C on an airborne opponent. The st.C causes an air reset that'd leave no room for a juggle but qcfx2+AC is still able to land. They are rare but a few of these moves exist and the most useful one is definitely Kasumi's hsdm.

After a knockdown, characters have variable wake up timings. The differences are listed here:

Standing Height varies based on the character. Tall characters are typically prey to higher moves than shorter characters although the difference usually matter less when standing.
The different tiers of standing height are listed below.

When blocking, there can also be a change in the height. Most characters stay in the same tier, here are the ones that change tiers:

Crouching Height varies based on the character but is sometimes unintuitive. Most tall characters stay relatively tall while crouching, preys of choice for instant overheads, cross-ups and just moves that others would duck under while a few tall characters crouch unexpectedly low, comically joining the ranks of short characters that can dodge a number of attacks by just holding down.
The different tiers of crouching height are listed below.

When blocking in crouching position, there can also be a change in the height or width of the character's hurtbox. The different types are shown here:

Credits to Gatoray KOF for the image.

This list evaluates crossups by different characters based on how easy they are to land, as well as conversions off of them. Credit goes to Emilkof, Franck Frost, Rei, Borscht and FNGR. 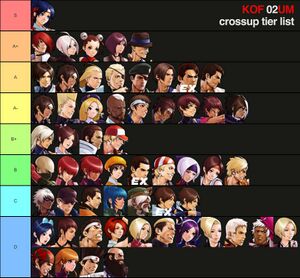