The King of Fighters 2002 UM/Nameless 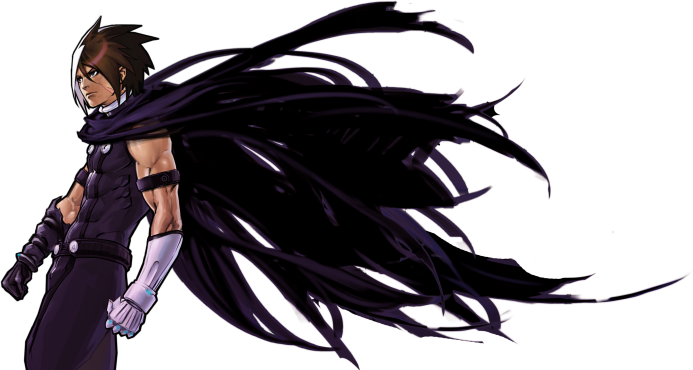 Nameless is a bit unorthodox character. He possesses a number of unique tools and pokes that are very safe on block and make up his strong mid range / neutral game. But he is best known for his Max Mode combos. He gets very high damage in Max Mode with relatively easy execution and no need for manual run after the activation, and due to his unique multi-hit normals, he gets a very long confirm into the combos. Not only that, he also gets a touch of death combo for 4 bars. All of this established Nameless as the notorious top tier anchor of KoF 02UM.

However, without Max Mode, he is not quite as strong. His meterless damage is fairly low, and his average mixups can make it pretty hard to open up the opponent; besides, with his short jump, he may have trouble actually getting in. Another tricky part about playing him is that his DM is performed with an infamous "pretzel" motion (db,hcb,df+P), which makes the execution of some particular combos for him notoriously hard.

Nameless may be played in a very simple fashion, but his unorthodox tools, as well as low damage without Max Mode make him a bit of a hit or miss character for a beginner. Still, he's an excellent pick for a mid / anchor for more experienced players.

The last dp+C is always optional, you can go straight into db,hcb,df+P from the last qcb+K.

You can link it but it's more consistent to late cancel cl.D into d,f,df+ABCD.

In the corner, the dp+C after df+D will only do 1 hit if you don't delay it. It's best not to delay it but just cancel it on the 1st hit.

First is to note that you can longcut the DM as hcbx2,df+P which means if you use the longcut hcb,f+C for the dp+C you only need to enter hcb,df+P to get the super cancel.
Second is to press "db" then do the dp+C without taking your hand of the controller, as soon as you do the dp let go of C then proceed to input the "hcb,df+P" then the DM should come out, it's a very awkward input and has to be done by the second hit, the only way to get it down consistently is to practice.

Differences between K9999 and Nameless