The King of Fighters 2002 UM/Ralf Jones 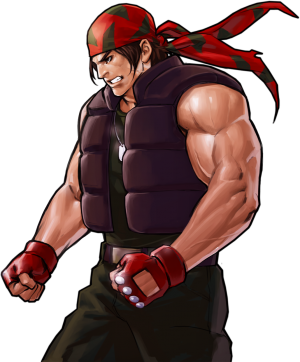 cr.B is plus on hit so Ralf can link hcf+K after it for a decent hitconfirm. 21%.

Meterless bnb off a fast chain. hcf+K gives better damage and hard knockdown compared to the easier and longer range but less consistent b~f+C, see above note. With hcf+K, 27%.

Good damage but poor confirm, mainly to punish or off jump-in. qcf,hcb+P misses some hits on crouchers but does great chip damage on block, 14%. Shortcut as qcf+C, qcb+P. Against standing, 35%.

Best damage for a bar although more suited for punish or jump-in conversion. There's enough time to just jump and do qcf+P, and if necessary j.qcf+A is faster for the same damage. Shortcut as qcb+C, qcf+K. 44%.

2 bar non max conversion. The damage is decent but keep in mind b~f+C's inconsistency as noted above. 52%.

Hardly confirmable low conversion. Reminder that b~f+C will whiff on the ones mentioned in the note above. 53%.

Different version with a better confirm. 61%.

Version of the max route more suited for punishes and jump-in conversions. 58%.

Version of the max route optimized for damage. On top of the ones previously mentioned, b~f+C will whiff on crouching(Bao, Nameless, Ralf, Clark) in this specific route. Against crouching(Kyo, Kyo-1, Kyo-2, Shingo) you have to delay b~f+C or it'll whiff on them as well. 61%.

Situational but extremely damaging counter hit conversion. Best suited to punish a dp on whiff/block. Shortcut the SC as qcb,f+A (or hcb,f+A) into qcf+K. More samples in #Videos. 85%.

Decent meter dump for immediate damage on a punish. Unlike the DM version, qcf,hcb+AC won't lose hits on crouchers and it does 24% of chip damage. 50%.

Slightly better option than the previous but way more unsafe on block. Using the follow-up qcfx2+AC without getting the frame perfect ToD hit will result in less damage than not using it so don't. 53%.

It adds 7% damage. Not much but worth knowing.