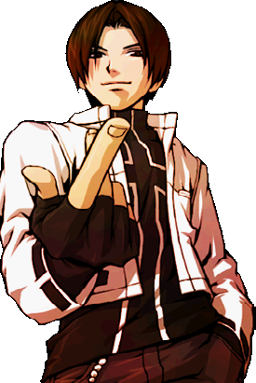 EX Kyo/NESTS Kyo appears as a bonus character in the PS2 & PS3/PSN version in KOF XI. His moveset/appearance is based off of Neo Geo Battle Coliseum.

- Normal Kyo is able to do Yami Barai, Kamikura, And Hikigane during Aragami/Dokugami, where EX Kyo cannot

- EX Kyo is able to do Mu-Shiki, R.E.D Kick in the air, & Hikigane standalone, where Normal Kyo cannot

- (Although both of them can still do the ground version)

- One of Normal Kyo's j.D attacks is used as EX Kyo's j.E animation, meaning they have different j.E attacks

Tiger Slayer - Near opponent, press back or forward + C or D

Kyo's basic anti air maneuver. The Oniyaki is only affective against jump attacks during it's later frames of attack. This requires you to initiate the Oniyaki very early in reaction to a jump. As a side note, this attack can be super canceled into Kyo's 182 Shiki. This is unfortunately only useful for corner juggles starting off of the 75 Shiki Kai maneuver.

Kyo leaps forward with an arcing drop kick. Although it's fast enough to punish anticipated ground attacks and projectiles, the R.E.D. Kick hasn't been safe when blocked for a quite a few years now. Although most characters have trouble punishing it consistently, characters with fast super attacks (Like Gato), have no trouble dealing damage to anyone thinking it's a good idea to do this move. In most cases there's simply no reason to use this move over a low jump, which is safe, an overhead, leads to huge combos, and almost as fast.

Kyo dives towards the ground doing the R.E.D Kick animation.

Neither the ground or air versions hit overhead in this game, unlike in KOF 98.

The Aragami is the opening attack to a combination of follow up attacks. The Aragami itself has a small window of Auto Guard just before the strike. Although not incredibly useful, the auto guard can be helpful for beating anticipated counter attacks at semi close range. If close enough, the QCF + P--> K follow up will combo after the first initial hit, scoring you a knock down.

Hikigane is the KOF 2000 onward versionm & can be used on it's own, unlike with Normal Kyo.

The heavy version and still dodges high attacks, while the light version can hop over low attacks. I believe it also still launches opponents into the air.

Kyo lunges forward with a series of punches. With the ability to combo this attack off of hard attacks and Kyo's df + D, the Dokugami should be used strictly for combos.

Kyo leaps into the air with a 2 hit kick. This attack puts your opponent into a jugglable state after it connects, making it highly useful for damaging combos when you get an opening.

However, unlike KOF 2003, Kyo has a special install super that he can activate by using his special taunt (only after the move hits successfully) that allows him to cancel specials into each other, similar to Max Mode in KOF 2002.