The King of Fighters XI/Mai Shiranui 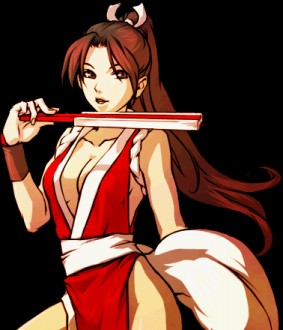 A KOF/Fatal Fury mainstay and fan favorite, Mai Shiranui was surprisingly absent from the Arcade release of KOF XI.

But in the PS2 version (and the Japanese PS3/PSN rerelease of that version),

Mai is one of the 7 characters included as a bonus for players to unlock by completing certain challenges in the Challenge Mode (Challenge #20, in her case.)

Like most of the other PS2 bonus characters, her moveset and appearance are based on her inclusion in Neo Geo Battle Coliseum.

-In addition to the normal ground throws, there's also an air throw where you hold a direction other than up and press one of the strong buttons near the opponent where she drops and slams the opponent down on the ground.

Ryu Enbu - QCB+P (Spins and whips the tail of her outfit forward, creating a little wave of fire in front of her)

Hisatsu Shinobi Batchi - HCF+K (Cartwheels forward, does multiple hits, I want to say around 3-5, depending on the opponent's position if the move connects)

Musasabi No Mai - This move actually has two variants to it, as shown below:

Ground version - Hold Down, then press Up+P (leaps backwards into the air, and when she hits the wall, she will dive down diagonally forwards.

Air version - QCB+P in the air (just does the dive without the leap.)

Kagero No Mai - QCFx2+P (giant fire pillar super, loosely based on how it looked in Real Bout Special, does about 6-8 hits

Gekka Botan - QCFx2+E (Mai does a dive, and if she hits the opponent, she'll grab onto them and have shadow clones dash through them before she causes them to explode. Similar to her Potential Power super in Real Bout Special, except it can only be done in the air. This can be used/Dream Canceled into from Chou Hisatsu Shinobi Batchi.)