The King of Fighters XI/Malin 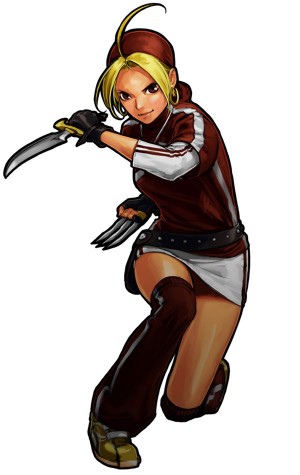 Malin is a pretty fast character. She's also the only one who can Super Jump the entire Screen. Which is perfectly fit for runaway tactics. She also deals great damage and her Leader Desperation Move (LDM) is one of the best in the entire game. Also, she's really reliable when it comes to fill stocks. So you can stock up, and if she's not the leader, call on someone who can correctly spent all those stocks. And since she has the longest jump in the game, she's one of the best air-to-air fighters, seconding only Bonne Jenet. Enough with the Introduction, let's go!

If she's your Leader, always use her as a second character. She's strong enough to not be in first, and is even more dangerous with Stocks.

If she's not your Leader, she can go first. Her primary use will be to build stocks, working as a battery character. She's fast, think about it. You may leave her alive for a runaway game once in a while.

She's not very good to deal with ground-to-air stuff. Most likely, someone with a nice jumping attack range will be trouble for her. Her most reliable attack when it comes to this is her dp + C, but it requires training.