The King of Fighters XIV/Geese Howard 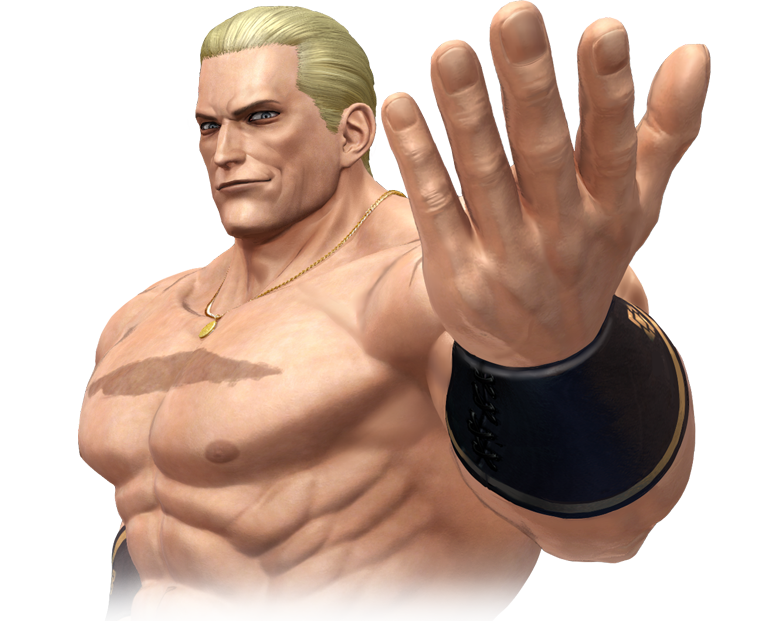 Geese Howard is the final boss from the original Fatal Fury series. He has made numerous appearances in the KOF series, once in KOF96, others in non-canonical dream matches, cross-over games, and cameos. Geese is the character who originated the the concept of the "SNK Boss Syndrome" (which is generally a term that general translates to a final boss character being absurdly difficult with AI that will constantly read the players inputs. Occasionally, the said AI will often have huge oversights that make defeating the boss very tedious). Over many years, he has gained the reputation of being the original SNK boss with a rather unique move set consisting solid offensive options, projectiles, and very lethal counter attacks, the latter which he is well known for. Geese Howard makes another canonical appearance in KOFXIV as the leader of the Southtown Team, joined by Billy Kane and Hein.

In KOFXIV, Geese retains most of the moves that he is known for. His Reppuuken is a ground-based projectile that travels across the screen (in some of Geese's appearances, his Reppuuken served served as a close range that retained its projectile properties and was useful in a lot of combos). He also has Shippuken the air projectile that propels him backwards after launching it in a 45 degree angle towards the opponent. While Shippuken is very useful, it is also risky as it leaves Geese vulnerable for a few frames after landing on the ground. He also retains his nasty counter-attacks but some of them work a bit differently than they did in previous installments, specifically HCF+D which is the mid-counter. It is actually a combo starter. After countering a specific mid-hitting move on the ground, Geese flings the opponent to the other side, leaving them in an extended hit stun state. Thus, it acts a lot like Iori's Scum Gale command grab when it used correctly. As usual, all of Geese's counter attacks require very careful timing and reaction as they cannot be abused and they can be heavily punished. Geese's normals are still relatively powerful, such as his st.C, st.B, and his f+B for example, the latter which can cover quite a bit of distance. He also has a new normal which is his forward+A, which is an overhead. It can combo easily from his heavy normal moves and it can cancel into special moves as well. Another thing to note about his special moves is that he has a new move known as the Fudou Ken (QCB+P), which seems to replace his Jaei-Ken, an older move he normally had in his last appearances in a KOF game. QCB+A is quick but does not offer the the follow ups from the hard punch version. The C version of Fudou Ken and its follow ups can be used very well in juggles and finishing combos for big damage. However, the follow ups from them are not very safe on block, even though they can be treated somewhat like rekkas. Then there his Raigou Reppuuken which has Geese launching a bigger projectile towards the opponent on the ground, even having OTG properties for guaranteed damage in some cases. He also has a DM that operates as a counter against moves from all angles but requires very good timing in order to use properly. Then there is his Raging Storm which is easier to input this time around. Instead of the usual "pretzel" input (db,hcb,df+P), Geese has a more lenient command for utilize such a technique but it will zap meter pretty quickly, consuming 3 bars, as it is his climax move.

Geese also has a number of ways of getting guaranteed damage against opponent that are on the ground, having quite a few OTG moves (DP+P, Raigou Reppuuken, and even his Raging Storm climax). To augment this, he would have a lot of moves that force a hard knockdown (his f+A, his HCB+B counter, and his Fodou Ken f+K follow up).

Overall, Geese is a powerful character recommended for players with decent reactions and a strong knowledge of KOF-based fundamentals.

EX: A lingering air fireball that beats down any regular fireballs. Useful for creating pressure and for reset options.

EX: Pushes the opponent towards the corner and causes a wall splat. Often used for combos.

EX: hcb+BD counters everything except lows and has 1f startup. It has the animation of hcb+B.

An OTG finisher that’s often used to finish combos upon hard knockdown. It also causes a hard knockdown, but only has enough advantage to meaty with something quick. Also causes position change.

Max: An OTG super that has slightly faster startup (11 frames) and dishes out more damage. Also often used as an ender for certain combos.

Max: A super that protects upper and lower body and dishes out more damage. Causes a hard knockdown and is climax cancellable. Both versions of this counter super have 1 frame startup.

Just do the 1 meter combos and end in raging storm

Just do the 2 meter combos and end in raging storm

Against Forward Roll, (Mid-screen and Corner):