The King of Fighters XIV/Kyo Kusanagi 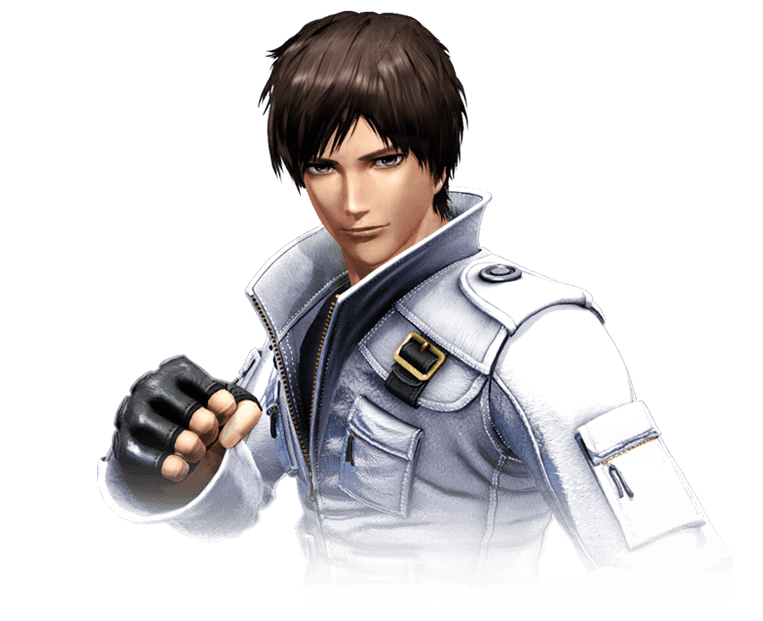 Kyo Kusanagi is and always has been one of the poster boys of the King of Fighters series ever since his debut in KOF94. Coming back once again as playable character, Kyo sports most of his recognizable moves while having a lot of changes done to him to fit the King of Fighters XIV game. This time around, Kyo is utilizing his fighting style based more or less on how he fought in KOF98. Whereas, in KOFXIII, there were in fact two Kyo versions, one of which were available via DLC purchase. The default Kyo in XIII was centered on the fighting style he started off with, while NESTS Kyo utilized the famous rekkas and the KOF98 approach (while still dressed in his NESTS saga outfit. The fighting style in question, originates from KOF96 when he began using flame laced punching attacks for elaborate rekka follow ups).

Once again, Kyo retains most of his moves from former KOF games, sporting a nice close to midrange game. The main idea of Kyo in KOFXIV is to take advantage of well-placed normals and jumping normals for defensive measures and getting in on the opponent to conduct a barrage of violent attacks with the use of Kyo's rekkas and his juggle combos off of his upkicks (qcf+K~K). Another thing to notice about Kyo is that his EX moves are accessible through MAX mode, much like every other character, thus the players needs to understand how to utilize the said EX moves in order to effectively dish out damage. As expected, Kyo has relatively good damage output and excels pretty well at air juggles as he normally does. He also has a new rekka follow up from his qcf+A (Aragami) where he can perform a low flame laced punch. This will augment his potential mix-up game from the rekkas he already has at his disposal, as he now conduct lows into overheads and vice-versa, along with delayable inputs against a defending opponent. Otherwise, they are also very useful in combos. Another thing to understand is that most of Kyo's normals remain the same but with some subtle differences from past games, which is to be expected. For example, close st.C now hits twice and you can only cancel the first hit. With little things like this in mind, along with the general concept of Kyo's game play, the KOF player should have a pretty good time adjusting to his iteration in KOFXIV as he is a very fun character to play.

EX: Has full auto-guard, and causes a soft knockdown.

EX: Provides a ground bounce on hit, making it a strong combo tool.

EX: the EX version is used in a similar way, and launches even higher.

EX: Also has armor properties and the armor kicks in immediately unlike the normal versions

EX: A fast command grab. A good surprise after a max mode activation.

Max: Does more damage and an extra follow-up hit.

(two low hits into a mid attack. The cr. A will whiff if the first 2 hits are blocked. cr. A is best cancel-able into qcf+A. A jump-in attack can be added beforehand for more damage)
(Best used as a punish confirm. Add a jump attack beforehand for more damage)
(low starter that does 4 hits. Ends with df+D that is cancel-able on the first hit, but the 2nd hit can be Max Mode cancelled safely.)
(cr. B to cl.C is a link that can also be used as a frame trap. Has to be close to the opponent to connect.)
(three lows into a mid that can easily convert into Max Mode.

(Easy hard knockdown combo. The cr.A will whiff if the 2nd cr. B is blocked.)

(Easy corner carry going straight into rekkas from crouching normals. The cr.A will whiff if the 2nd cr. B is blocked.)

(Easy corner carry. Be sure to delay the kick follow-up after the second rekka.)

(Ends in a hard knockdown. Omit the 1st qcf+A for less damage, but an easier combo

(The second cr.B might make the cr. A whiff if you aren't close enough to the opponent.)

(Every easy combo for 1 bar without using max mode. You can choose to not hold the super if you feel that it will miss but there will be less damage.)

(kara whiff cancel the st. CD for the qcf+A to properly catch the opponent after the qcf+BD juggle.)

(delay the second hit of the qcf+D>D for qcf+A to connect as high as possible. Use the shorcut hcb,f+A~hcf+P do super cancel the dp+A into qcb~hcf+P smoothly. Hold the qcb~hcf+P briefly enough for dp+A can juggle afterward.)

(Delay the second kick of the qcf+B>B for you can properly time the two qcf+A's. You can exclude one of the qcf+A's for an easier combo.)

(Delay the second kick of the qcf+B>B for you can properly time the qcf+A for the qcf+BD to connect.)

(Juggle the opponent with qcf+AC at the highest height it can hit with. Delay the second kick of the qcf+B>B for you can properly time the qcf+A, then another qcf+A.)

(Easy combo but can get more damage from using max mode. Recommend for beginners.)