The King of Fighters XIV/Terry Bogard 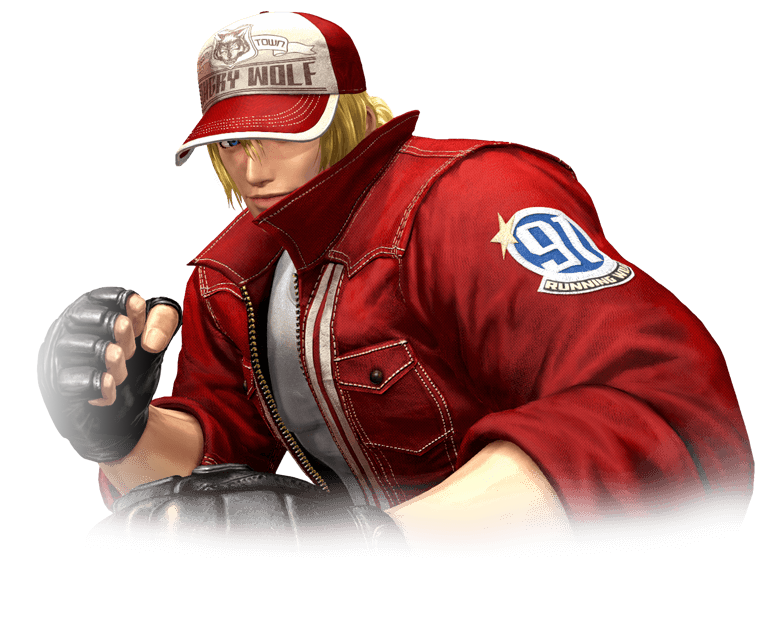 Terry Bogard is the extremely well-known protagonist of the Fatal Fury series which happens to predate the King of Fighters series. After so many appearances and iterations, Terry expectantly returns once again in XIV to duke it out with the cast, both new and old. For the most part, Terry's game plan consists of mainly fundamental elements, possessing good normal moves and a relatively simple move set at face value. His special moves are similar to how they had functioned in XIII, but every present move has been altered (along with the addition of his clasic Power Charge). He retains his Power Wave projectile but this time it works like it had in his initial appearances in KOF; with it being both full-screen and having its speed influenced by the strength of the punch button. He of course also has his Burn Knuckle (which as this wiki will depict, is quite the important move) along with many of his other signature moves. Much like every most returning characters, Terry takes effective advantage of XIV 's system mechanics. Terry is a character that can hit pretty hard and excel from utilizing fighting game and "KOF specific" fundamentals, as his versatile and reliable moveset rewards those who play him with such fundamentals in mind. Any player of any skill level cannot go wrong with picking Terry.

EX: A faster Power Wave which possesses a slight bit of start-up. Its most notable aspect is its 3-hit property, making it both do larger amounts of guard-damage than both versions of "normal" Power Wave. However, it also happens to possess larger amounts of recovery than the other versions, making it a tad bit difficult to implement in the "neutral game." Canceling St.CD into EX Power Wave will result in a combo, making it effective for the sake of making Terry's already great St.CD to be even more potent than it already is.

EX: A very fast, more damaging, and slightly longer range version of Heavy Burn Knuckle. Can function as an ender to the majority of MAX Mode based combos when one does not wish to spend(or simply cannot due to a lack of) additional meter on a Super or Climax cancel. Its speed makes it as an effective way to essentially "snipe" Hops or Jumps out of the air on reaction in most cases, but if it is somehow avoided or blocked due to a mistake or miscalculation it can be very unsafe, making it important to know when and when not to utilize this move.

EX: Comes out a slight bit quicker than the Light version of Crackshot while having range which is very similar to that of the aforementioned Light version of the move. On hit this move applies a ground-bounce effect on the opponent, allowing for Terry to follow up the move with another to continue (or in most cases end) a combo. Provided that the opponent is not within or in very close proximity to a corner, one can link this move after an EX Power Charge, allowing for Terry to potentially achieve a very high amount of damage.

EX: A faster, more damaging, and most importantly invincible (for a portion of the move's duration). It also goes incredibly high while rising, making this version of the move easily the most punishable, which means that careful implementation of this move is pertinent to avoid being harshly punished.

EX: A swifter version of Power Charge which goes about one character farther than both normal iterations of the move. This move will function as your main MAX mode combo linker at Mid-Screen, as its main feature lies in how it applies a wall-bounce effect on hit, allowing for almost any follow-up of your choosing (that is disregarding both versions of normal Power Charge, as you are incapable of linking them after this move due to them technically being the "same move"). Despite the move's effectiveness, the wall-bounce effect does push the opponent fairly far back, making it so that when in the corner you are no longer capable of linking any special (asides from Rising Tackle) which is capable of being super-canceled and linking EX Crackshot for the sake of combo extending is also impossible. This iteration of the move also happens to possess a hit of armor, allowing for it to be used as a way of literally going through the opponent's offense.

EX/MAX: The EX version of the move possesses slightly faster start-up, priority, the ability to travel full-screen, and a very slight bit of invincibility on start-up. Unlike the "regular" versions of Terry's Super Special Moves, the EX version of Buster Wolf will typically deal more damage within combos than that of EX Power Geyser due to the inconsistency of the latter move (which will be further explained shortly), making EX Buster Wolf your main Super Special Move for extending MAX mode (or 2-bar combos which do not use that of MAX) combos.

EX/MAX: A quicker, more powerful, more invincible, more everything version of Power Geyser. Much like in previous titles, the EX version of this move results in Terry producing three larger geysers rather than merely one. While this move CAN deal more damage than EX Buster Wolf, due to how its damage is spread throughout all three geysers and how the opponent will in most situations not come into contact with the entirety of the move, causing it to typically deal a fair bit less of damage than that of EX Buster Wolf. This is only made more apparent when utilizing this move in the corner, as it will inflict even less damage than it typically does from full-screen due to how the opponent will only come into contact with a small portion of the move.

Meterless: Terry hits the opponent 4 times before canceling into Burn Knuckle. Due to Terry's fairly high amount of combo options in most situations, this will rarely be used. If for whatever reason you do plan on using this Auto Combo, you can perform a Safe-Jump proceeding this combo due to how it will end with a Light Burn Knuckle.

1 Meter: Same as the meterless Auto Combo asides from how the Burn Knuckle will be canceled into Buster Wolf. Deals around 220 points of damage, and much like with most characters there is almost no point in attempting to implement this within your game plan.

EX: The super in which this concludes with is EX Buster Wolf, dealing around 300-400 damage as a whole. One can inflict around 550 points of damage if they were to perform an optimal MAX Cancel combo in the corner in which the Auto Combo is linked after a EX Power Wave canceled CD, but Terry does possess superior options to this when performing 2-Bar MAX combos.

(Allows for fairly damaging follow up after a successful CD)

(Inflicts large damage, makes CD even more threatening when present in the corner)

(Pushes opponent a large distance across the stage, more damaging method of linking a super from CD)

(Deals highest amount of 1 Bar damage that can be achieved from any point on screen, leads into Safe-Jumps due to Hard Knockdown effect applied by EX Burn Knuckle)

(BnB low-hit confirm for those playing Terry on point, does a fair bit of damage while allowing for continued pressure after Rising Tackle)

(More damaging version of previous combo, benefits from the same results with the only real downside being how it lacks the "low" of the alternative combo)

(Deals almost half of a life-bar of damage, EX Burn Knuckle allows for Safe-Jump follow-up proceeding its conclusion)

(Only worth mentioning due to you are only capable of performing this in the corner, similar MAX mode combos will almost always be used in favor of this combo)

(Nice way to convert effectively off of a successful CD)

(Not as damaging or as effective as alternate "Anywhere" combos, typically not recommended as it does not offer anything over that of specific opposing combos)

(Fairly simple yet damaging BnB, more effective than most combos which consist of Advance Canceling Buster Wolf due to how Power Geyser deals more damage and possesses less scaling than that of Buster Wolf)

(Highly damaging, finds usage for those willing to spend 4 bars when playing Terry on middle)

(Practical given that you happen to have 5 bars and score a jump-in, one of Terry's highest damaging combos)

Video Example of one of Terry's Burn Knuckle based Safe-Jumps

NOTE: Keep in mind that following the release of Version 2.0, these Safe-Jumps can only be legitimately performed after the Heavy (and if the special which is used to properly time the Safe-Jump is changed, the EX) version of the move, as Light Burn Knuckle no longer has Hard Knockdown properties.