The King of Fighters XIV/Yuri Sakazaki 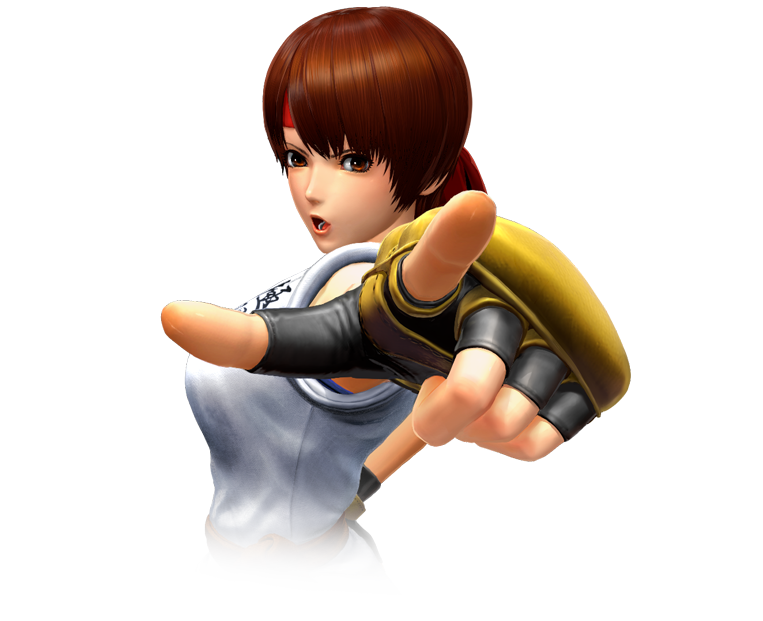 Yuri, akin to her appearance in The King of Fighters XIII, is a rather unique character whose tool-set has a little bit of everything. Ko-Ou Ken is a short ranged projectile that is useful as a long ranged poke and combo tool. Houyoku is a ‘Demon Flip’ with a number of follow ups that are great for combos, mixups and pressure. Her iconic Yuri Chou Upper is both a reversal and a combo tool. Saiha, meanwhile, can assist her with zoning characters. Raiou Ken can help her play a keep away game or cover her approach. If all that weren’t enough, she has an excellent punish, mixup and combo tool in Hyakuretsu Binta, a 1-frame or running command throw depending on the version.

Her other advantage is that she is a mixup machine. Besides the aforementioned Hyakuretsu Binta and Houyoku, her j.D cross up is one of the best in the game and very easy to land on either standing or crouching opponents. Her dive kick, while not as strong as it was in KOF XIII, is also a useful mixup tool. Her overhead is a bit unorthodox compared to the rest of the cast but still very useful and can lead to damaging MAX Mode combos with the proper spacing. Pressure normals such as st.A, cr.A and cr.B also help to open up the opponent up. She is also one of the few characters to possess a 3-frame normal (cr.C), which is ideal for combos and frame-trapping.

Yuri, due to her damage output and ability to build meter, can realistically be used at any position. Her flaws include short ranged normals and a slight execution barrier, but she is a solid addition to anyone’s team.

EX: Has the range of the C Version and has the fastest startup. Good to use during corner MAX Mode Combos

EX: More invincibility and more damage. Yuri does her Double follow up from past games automatically, which is good damage wise but makes this special bad to whiff or block due to the longer animation.

EX: Launches like the C Version but is fast enough to be comboed into. A very important tool during her MAX Mode combos.

EX: Yuri fires two fireballs. She will keep whatever her current momentum is like the D Version. Like the D Version, you can link certain normals off it depending on Yuri’s spacing and screen position.

EX: The move becomes a hit grab, meaning it can be blocked. As a trade off though, it gains some invincibility during the startup, allowing Yuri to blow through a lot of moves if timed right. Very negative on block, so make sure it hits if you’re going to commit to it.

EX: Yuri will flip right in front of the foe no matter how far she is unless she is too close, where she will instead flip right over them. Has pretty fast startup, and all the follow ups get buffed. Hien Souha, Yuri Raijin Kyaku and Tsubame Otoshi all get damage buffs. Raiou Ken acts like her regular EX Raiou Ken by throwing out two fireballs.

Max: Slower startup but more invincibility. This version makes a much better anti-air because it ‘locks’ in opponents.

Max: Does a ton more damage and is just as easy to combo. Has more invincibility, so you can use it to blow through certain things if you time it correctly.

Max: More damaging, does 3 hits and is the fastest version. It is so fast in fact that it can punish a bevy of moves from full screen.

(You can use cr. Bx2, st. B instead of cr. B, cl. C for an easier confirm but with less overall damage. You can also start with a jump-in attack using j.D or j. C, then cl. C into a special move.)

(Weaker but sets up super cancels)

(correct spacing is from blocked cl.C or meaty overhead)

(You can use cr. Bx2, st. B instead of cr. B, cl. C for an easier confirm but with less overall damage. You can also start with a jump-in attack using j.D or j. C, then cl. C into Max Mode activation [BC])

(You have to run slightly and then DP, which has a very tight timing. You can omit the DP instead for about 30 less damage but easier execution)

cr.A > cr.C - 0 frame gap - There is no gap between this, making it one of the most ridiculous frame traps in the entire game.