The King of Fighters XV/Clark Still 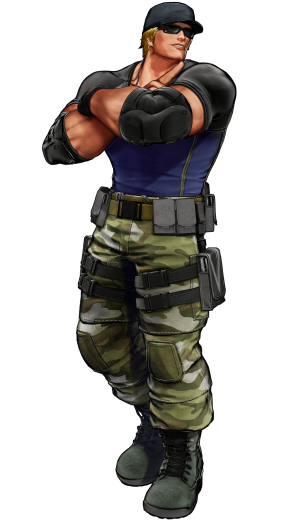 Clark is a mercenary who has fought alongside Ralf on numerous battlefields. His rank is lieutenant, and in addition to Heidern-style assassination moves and martial arts, he specializes in wrestling throws and locks.
Always calm, he has earned immense trust from Ralf.

Clark is KoF's mixup grappler. Compared to the normal grappler archetype like Dinosaur/Zangief that slowly work their way in and then cash out with a command grab, Clark's goal is to get you into a hard knockdown (HKD) after his Flashing Elbow follow-up and then run the ultimate guessing game: safe jump, delayed grab, overhead, or complete shenanigans. While all combo roads generally lead to the same situation, Clark is not just all about the grabs; his j.A, far B, 2D, and far C are all-star normals and allow him to work his way in and get the opponent scared. Clark is not without his faults; he is hampered by a lack of a true non-metered reversal, his AA buttons are lacking, and he has to play KoF Fundamentals to get around Fireballs and good keepout. Clark is perfect for beginners as his Armored/Invulnerable Grabs can help him sneak in damage when they shouldn't, but his toolset can be fully explored for a complete character that can compete at the highest levels.