The King of Fighters XV/Luong 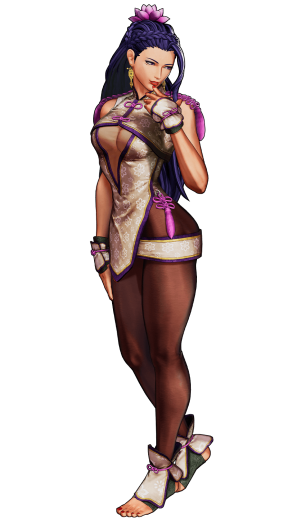 Luong is a femme fatale type fighter with mysterious motives. She can and will lacerate her enemies like a whip with her long legs and her arranged tae kwon do kicking techniques.
This KOF, she's seemingly working in opposition to her lover Gang-il and his disciple Kim, but perhaps all is not how it seems...

Luong is a character who made her debut in the previous game, KOFXIV.

Her game plan at that time was relatively simple: She excels at fighting at the mid-range while setting the target up for high-damage combos. Luong is one of the more relatively easier characters to play but making use of her mix-up potential from her insta-air overheads from Max Mode did require a bit of practice. With these aspects in mind, Luong was a relatively strong character whose game play lies in mid-to-close range neutral and using feints to bait enemies into making mistakes.

The character is also known to have a lot in common with Yamazaki, particularly with how their feints work from their special moves and the fact that a part of their gameplay lies in punishing targets heavily for their mistakes after baiting them out.

She also has options to exploit while in midair, her jumping air 214+K. This is her jumping cartwheel that enables her to slightly change the trajectory of her landing and also build meter. In addition, she can also cancel some of her jumping normals into air 214+K which can yield some rather devastating mix-ups and damage, specifically when going from jumping A (light punch) and then canceling into her EX 214+K which yields a full combo and will still hit overhead and will even cross targets up depending on whether the user hops forward or not. This was specifically exploitable from Max Mode canceling from a light normal.

As of now, she is still capable of this feat in the mix-up department, thus she remains a major threat just as she was in KOFXIV.

This aspect of Luong remains largely the same. As of this time, she has a new move from 214+P, where she delivers two kicks to send the target flying. The EX version serves as a wall bounce (wall wire) for combo extensions, which offers the player more creative combo potential. The regular versions of 214+P enable her to either end combos and also super cancel into her Desperation Moves when either of them lands successfully.

Another addition is her 236+A, 236+B, 236+C which normally enables players to hold the corresponding button and feint out the rapid kick strikes with D while keeping them held. What the player can do in addition to this is dash cancel, which will have its own uses.

If the player is looking for a relatively simplistic approach with a variety of options for baiting out the enemy's mistakes from her special moves, Luong is an excellent character to pick up and is pretty fun to play.

When you do 236A/B/C, input 6 right after so the inputs overlap and you just get the dash. The input should be 236(A/B/C)56. Not used for combos but in pressure this has so much potential for throw mixups and general resets. Use with care since the pressure resets will probably be caught on in longer sets and you will be punished. This can be a really sneaky way to open someone up though and a great option for general movement.