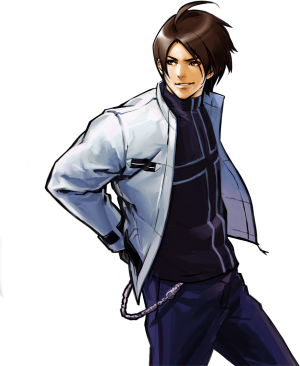 Advice: Reverse Knockdown gives Kyo a ton of options, mainly run-up j.d+C to cross-up BnB to combo ender, practice timing it so that you'll catch them as soon as they get up backward.

Cross-up Advice: Aim it so that his legs hits the opponent in the head then he will cross them up.

SC Advice: The SC points are on hit for both, but to get the most out of it try a launcher (qcf+D~D) then Hikigane (hcb+B, or hcb+D in corner) then you can freely SC into any of his DM's, 182 Shiki DM requires you to hold it for a little bit otherwise you'll whiff.

Combo advice: It's best to use this rekkas after a stand C, crouching C, or a stand D. You cannot juggle using these rekkas similar to the Aragami rekkas when using qcf+D~D as a launcher.

Combo Advice: Linking Orochinagi after qcf+D>K is decent damage for 1 bar midscreen. During a grounded max mode combo, charging it slightly after canceling from his qcf+C will make it connect and combo together. Read more about the timing in the combo section.

Combo Advice: The level 2 charge can be reached very fast, so fast that depending on range you can still combo off a special hitstun making qcfx2+A do more damage than Orochinagi in a ground max combo where you have enough range and the proper spacing to charge it.

Combo Advice: You can Super Cancel this easily from his hcb+B which will overall cost 4 meter stocks (2 stocks in max mode). You can also perform it immediately after a qcf+D~D launch when not in max mode. This SDM can also come into play in a few of his juggled max mode combos.

Combo Advice: Not something you'll lose any often in combos. It'll mostly be as a surprise option or a punish to remind the opponent that you do have a grab.

dp+C is a knockdown while df+D is more damage and provides max conversion while being safe on hit/block. Default to df+D.

Most reliable. If you have any doubt about spacing, just use this.

The last three all do less damage and/or have less range than the first. No reason to use them over the one above unless you aren't sure cl.C is gonna land, in which case the last route is safer.

If you don't want to bother with max mode, this is it. You can hardly add a jump-in if not a cross-up, not ideal. 40%.

If you use df+D(2) super whiffs on Robert and these inconsistent characters minus the st.Kyo_Jhun-tier and standing (Foxy, Leona). To add a front jump-in, use cr.B, cr.A and just more consistency altogether stick to df+D(1), keep df+D(2) for after a cross-up. 43%; 50% with df+D(2).

A bit harder but a more consistent basic route. You can add the hcb+P follow-up on the last qcf+C but it's little extra damage for less range, avoid it. 51%.

The basic option when you can do a decent max run. 49%.

Better option with a harder max run. You can still add the hcb+P follow-up on the last qcf+C if you use qcb,hcf+P but not worth it. 52%.

Works as long as you didn't start literally in the opposite corner. 56%.

Works at the same spacing as the previous one but has a fairly tight delay. Remove the last qcf+A or dp+C(1) for complete fullscreen but a bit less damage. 58%.

The basic option when you can do a decent max run. 53%.

The rekka cancels need to be timed appropriately to avoid qcfx2+P. Not worth much if you can do the previous one or the next ones, 55%.

Very basic option to just spend meter for some damage. 45%

The basic option when you can do a decent max run. 60%. If you slightly charge the super to get a flamebody hit then let go immediately you get 68%.

You need to briefly charge the super for the body flame to hit the opponent and put them in juggle before you let it go, it won't combo otherwise. Great combo for how easy it is. 67%. You can get 3 flamebody(fb) hits in the corner for 72%.

Only backturned opponent except Chang in corner. 71% with j.C cross-up. In corner 75%. Doesn't work on the st.Kyo_Name-tier and crouching Kensou. Stick to the previous one.

Works as long as you didn't start literally in the opposite corner. 3fb 80%.

Works at the same spacing as the previous one but has a fairly tight delay. If you reach corner for 3fb, 82%.

Don't hold the super and link the rest immediately behind it. 65%.

Don't hold the super and link the rest immediately behind it. 68%.

The rekka cancels need to be timed appropriately to avoid qcfx2+P. Not worth much if you can do the next ones, if you do qcf+A then dp+C low enough to get 3 flamebody(fb), 79%.

You need to land Ex Orochinagi as low as you can and get 3 flamebody hits before the super can do 2 hits and juggle. 91%

The basic option when you can do a decent max run. If you do qcf+A then dp+C low enough to get 3 flamebody(fb), 76%.

At a height where you can only get 2 fb, you can also delay super to only do 2 hits, which juggles so you can follow-up for a 94%. This is hard.

Delay the 2nd kick of qcf+D to get more time to raw activate max. 87%.

If you release super right away, it only does one hit that juggles and you can link after it. 89%.

If you release super right away, it only does one hit and juggles so you can link after it. 89%.

Delay the 2nd kick of qcf+D to get more time to raw activate max. 96%. This is hard.