The King of Fighters XIII/Ryo Sakazaki 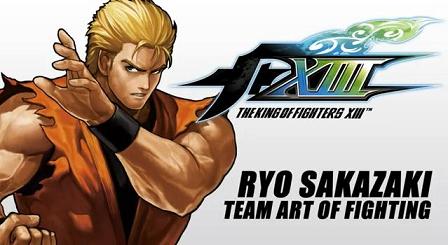 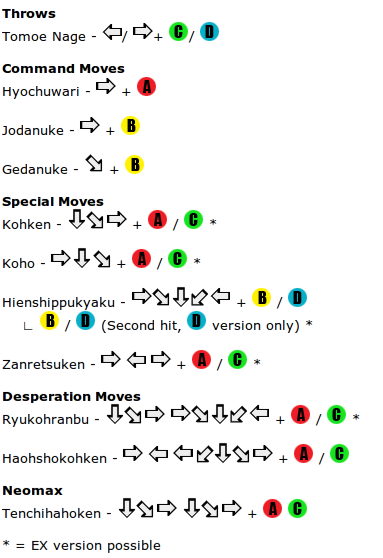 Ryo as a somewhat heavy character throughout KOF who makes more use of defending/invading one position instead of constant movement, relies on powerful hits and zoning. His normals are some of the most powerful and effective in the game, particularly st.C/D, especially D which makes for great follow-ups. He can be very beastily in the right hands, ending matches with fewer hits than most characters deal out, but he doesn't have as many long-string combos as many others as well. The Jodanuke (f.B)/Gedanuke (df.B) parries give Ryo's defense a level up that allows for excellent punishes with good reads. He can do decently if up against a projectile-happy character, up to a certain point, but needs to close the distance as his Kohken (qcf.P) doesn't reach across the screen. It shouldn't be forgotten that his EX Ryukohranbu (qcf,hcb.AC) will whiff most projectiles in the game. His screen-crossing combos might take some time to harness, but it's a great reason to utilize him as an anchor. If you're prepared to zone against a non-fireball character, he's decent enough on point too.

s.C 70 damage, cancel-able, hits mid. A safe, quick uppercut to the chin. Ideal for close quarters because it is more safe on block than his s.D.

d.A 25 damage, chain/cancel-able, hits mid. Same as his standing A, but crouching. Good pressure when in close range.

d.B 30 damage, chain-able, hits low. Great low poke, a good starter for his combos, and is safe on block.

d.D 80 damage, cancel-able, hits low. A wide ranged sweep that is cancel-able which makes it very safe to poke around with.

No Stock or Drive Gauge -

One of Ryo's most effective weapons is his Kohken. This move sets up a good deal of offense and is a great defensive tool.

Though Ryo's fireball is not a fullscreen forward progressing projectile, this is in no way a weakness. When using Ryo, consider his projectile to be a shell that expands and contracts accordingly to the right situations, and Fireball A/C/EX versions maintain it.

1. The fireball itself has a much larger hit box than it appears, especially when using the A version, which looks deceptively small, often catching as an anti-air.

2. The fireball knocks down on any version, which is huge in resetting your position or transitioning into rushdown.

3. Blockstun and recovery on the A version is really good, especially in the corner to setup mix-up situations. Blockstun on C version is also great long distance, but can be punished with a fast move if done at close range. However, if you whiff C version Kohken, it can be punished even from long distance from plenty of characters (K' comes to mind), and this is the version people are hoping to jump over or roll through to punish for a fat combo.

4. EX version comes out really fast and has invincibility, and you recover before they do, so use this move to throw the opponent off from reading patterns since it's not expected. Also, a good and safe option to use to get out of K's fireball traps in the corner.

Now with all these uses for the fireballs it sets up everything from being easier to predict when to parry, mix in uppercuts, set up jumps for anti-airs, or super, EX super.

He also has a very effective fireball trap in the corner with A, EX version, and even C version with particular spacing to bait the opponent to stick something out, then follow up with a parry or uppercut.

The downside though is that against maybe one particular character (Chin!!) the fireball game becomes a dangerous game to play due to his (Chin's) low to the ground size. His moves make him invulnerable to the fireballs since majority of the hit box is lower middle to high and makes it really easy for Chin to penetrate Ryo's defense.