The King of Fighters 2002/Mature

[1] This move does hitstun as if it were a heavy attack. Probably has to do with it being a command normal in previous games like kof98.

[2] Startup of these moves vary slightly depending on how far the opponent is away from you. 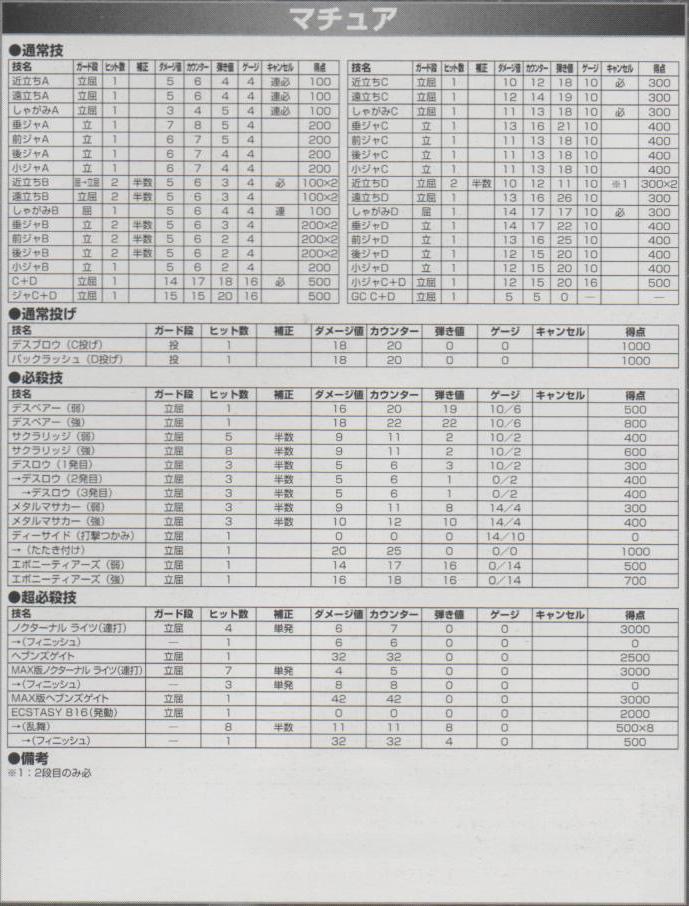 This is Mature's basic no-meter combo. If using crouch C, make sure it doesn't hit too far away of the qcb+Cx3 won't combo after. Using dp+C doesn't give you enough space between you and the opponent after the combo, to set up a fireball trap.

This is a combo you'll be using a lot, especially after a jump B or empty jump. Decent damage from a one stock low combo that is also easy to hit confirm.

This is your dash in combo and depending on how close you are to the opponent, you will have forced to omit some crouch B's. Comboing the 4 weak attacks before the super is very hard even if you are pointblank in front of the opponent, so I wouldn't recommend trying it.

Her most damaging one stock combo, use this off a hit confirm from a jump attack right before, or to punish moves with lots of recovery

The maxmode activation into hyper hop B makes this combo difficult to execute. It also best works against standing characters, or crouching characters that don't have low crouches(such as Athena's low crouch), otherwise the first hit of hop B won't connect and the combo will fail.

This is mainly a flashy combo and there isn't much reason to perform it. Far B stuns just like a strong attack, allowing you to combo the qcb hcf+K DM. Far B isn't cancellable so you have to use maxmode bypass by executing the DM with BC. This takes two stocks and so isn't really worth it for the damage.

Note: Mature has more maxmode combos that are for the most part, not that practical. This section will be updated later.

Mature isn't a particularly strong character, many tierlists placing her at lower-mid or mid at best. She suffers from a syndrome that is common with many characters in Kof2002 - she has too many moves that have no useful application outside of combos (or even in combos). The core of her game centers around a select few normals and special moves, those being her qcf hcb+P projectile, weak attack pokes, jump B and a few other ground/jumping normals to handle some specific situations.

Mature's zoning game is primarily based on the usage of her qcf hcb+A projectile. It's great mainly because it's slow, with a very tall vertical hitbox, making it difficult for many characters to jump over it. It also has good recovery time, making it safe at most distances from punishes. You can usually throw it out and be able to recover fast enough to anti-air jump attacks with crouch C, intercept jump attacks with superjump or vertical jump C, or run forward and punish rolls with crouch C.

You can alternatively decide to position yourself to be able to punish any actions the opponent makes, and if they block the projectile, immediately release another one. There's a couple of things to consider here. Firstly, note that Mature cannot have two projectiles on screen at the same time, which is why you are waiting for the first one to get blocked. If you try to throw out a second one while the first is on screen, you will get qcb+P coming out instead, which is a very bad move to whiff. Secondly if the opponent has meter, they can guard roll the first projectile and punish the second one.