Difference between revisions of "The King of Fighters XV/Maxima" 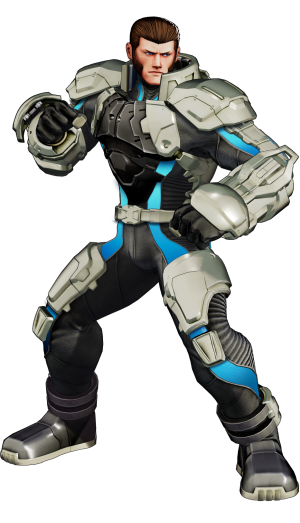 Maxima is a cyborg remodeled by NESTS. With 80% of his body comprised of machinery, he is equipped with weaponry everywhere.
His fighting ability is far beyond that of any human. As a loyal intellectual full of heart, he also understands K' well.

Maxima is a true juggernaut. Infamous for his devilish close-range game, Maxima excels at winning neutral and then dragging the opponent into an overwhelming midscreen offensive game. To help with this, Maxima has several great midscreen options, and decent answers to fireballs that range from low to high reward. Vapor Cannon makes for a fantastic, largely active, safe poke that leads to a hard knockdown and high damage on hit, and potentially the game itself on counterhit. However, Maxima's main downside comes in his speed. Maxima's walkspeed is slow, his runspeed is slow, and his moves all come out slow. This makes his Abare a bit riskier than other chars, and changes his playstyle quite a bit compared to the average KoF character. Master this, and you will be rewarded with big damage and incredible mixups.