The King of Fighters XI/Geese Howard

From Dream Cancel Wiki
< The King of Fighters XI(Redirected from Geese Howard (KOF:XI))
Jump to navigation Jump to search 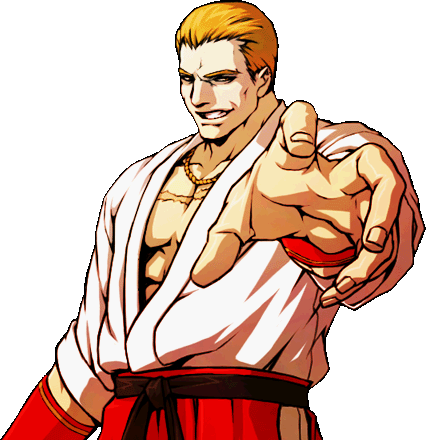 The infamous and fan favorite antagonist from Fatal Fury, KOF 96/XIV, Art of Fighting 2, and Tekken 7 reappears yet again in the PS2 & Japanese PS3/PSN version of KOF XI as a bonus character.

He’s noticeably somewhat different than the other bonus characters from NGBC, however: while his appearance is mostly based on his appearance from Neo Geo Battle Coliseum, his actual moveset has received a noticeable overhaul compared to NGBC, noticeably changing his Reppuken and Shippuken animations to the ones from KOF 96, and replacing his red Level 2 Raging Storm with the one from Real Bout Special/2.

Tiger Slayer - Near opponent, press back or forward + C or D

Double Reppuken - qcf + C (Also the short ranged one from KOF 96, Geese stands in place when doing both versions)

Shippuken - During jump, qcb + A or C (Yes, this one is the KOF 96 version, too. Geese also doesn't lose any of his current jumping momentum while using it, which is good for keep away, but not so good when there's a projectile on the screen and your trying to slow your decent to avoid it,you can't really use Shippuken to do that in this game.)

Shrieking Lightning Shockwave Slam - When opponent is down, press down-forward + C (a command grab where Geese reaches towards the ground and will throw them to the other side if it connects. This move can only be used when the opponent is on the ground, and you have to be really close to the opponent & have just the right timing in order to grab them. Can be used for an extra bit of damage after a combo and/or a super.)

Rashomon - Near opponent, hcbx2 + A or C (DC) (Super command grab originally seen in Real Bout 2 and SNK Vs Capcom for the Neo Geo Pocket Color. If Geese connects with the initial grab, he throws the opponent into the air, and when they come back down, he'll knock them all the way to the other side of the screen. Can Dream Cancel into RB2/LDM Raging Storm and Deadly Rave.)

MAX 2 Raising Storm - down-back, hcb, down-forward + E (Real Bout Special version, pretty much the same as the DM version, except it does more damage and you can Dream Cancel into it.)