The King of Fighters XI/Eiji Kisaragi 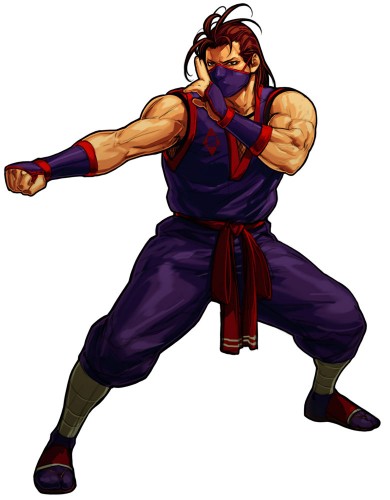 Pros: Uber recovery on everything except for one super, superior frame advantage on ALL specials, fast, easy to use, good normals overall. Cons: Limited combo options, horrible for switching, limited special moves.

Eiji is a wierd character. He has 4 moves that are basically the same. He is a limited character, but what he has is deadly, especially as a leader. His brutal simplicity is, often, overshadowed by his limitations as a character. Basically he is a character whose moves you have to abuse to survive.

Kikou Hau **** ( qcf + P) Very short ranged move, a blast of Ki energy that extends slightly from the hands and, if it counter hits, critical wires. Fast enough to combo, but its a knockdown. It comes out at average speed and has NO recovery, as many of his moves. Abuse, abuse, abuse.

Kasumi Kiri:***( qcb + P) Another very short ranged blade type attack. He dashes forward a little bit and cuts when he gets pretty close. Sucks overall, but it can be comboed into but not cancelled. Screw that!

Ryuu Kagejin: **** dp + P Yet another short ranged attack. Splits his hands appart and causes a glowing blade to appear across his chest. Comboable and stays out for a long time still with no recovery. What makes this a 4 star move is that it can reverse EVERY fireball including super fireballs if you are fast enough. Otherwise, pretty useless.

Kotsu Hazaki Kiri: **** hcb + K Basically like a chou ate giri or a hard vertical slash with a sword drawn from the back.

Tenba Kyaku: ** (rdp + K) Not a great move. Jumps at the opponent and kicks pretty much the whole way down. I don' t think it can be comboed like in AoF so aside from the low recovery, screw it.

Kiritetsu Nami:**** ( qcf,hcb + P) When I used him in AoF I would abuse the HELL out of this move. It is unbelievably deceptive. Eiji ducks, so the move comes out higher than his body. He sweeps as if to perform a chou ate kiri so the moves starts almost directly above him. Comboable, is you can time it. Overall A great move.

Kiritetsu Kamakiriken: *** (hcf,fcd or qcf,hcb + K) Pretty basic super, nice cause you can Dream cancel it and it hits jump ins if you don't trade.

Yami Kari: **** close, hcbx2 + E It's a throw, and it does really good damage. Other than that, nothing special.