The King of Fighters XI/Jazu

From Dream Cancel Wiki
< The King of Fighters XI(Redirected from Jazu (KOF:XI))
Jump to navigation Jump to search 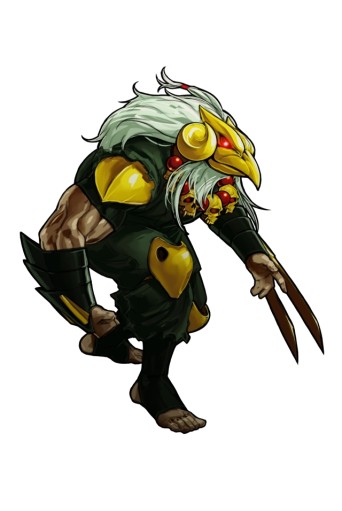 -Jyazu can link from light to hard attacks (A>B>C>D). Like Darkstalkers

-his counter move will counter (L)DMs. his counter sorta sucks compared to the other counters in the game. your opponent have to hit your fist for the counter to trigger

-the BB gun (dp+p or lk) can be reflected but since its 3 hits, it looks like its absorbed but really, its the BB pellets cancelling each other out

-both his DMs have slight invincibility on startup. with the punch version, its possible to knock elizabeth out of her LDM when done just right outside of her LDM.

KOUGEKI TACHI: Jazu does a non-knockdown standing E (a claw stab) that is cancelable.

KOUGEKI SHAGAMI: Jazu's df+C from Kizuna Encounter: he does a low slide, followed by a sliding claw stab. This is not cancelable.

KYOUKEN SATSU: Reversal move, counters high and mid-level attacks. I'm not sure if this can reverse special moves or (L)DMs.

KOORI HA: Jazu slams a fist to the ground, and an ice spike falls from above opponent's location. This works surprisingly well against a jumping opponent.

GOUEN DAN: Jazu points his wrist forward/diagonally upward/upward (A/B/C) and fires out 3 bullets. Each bullet will clash with a normal projectile, but floor-level projectiles will pass under. Certain characters may also crouch under the (A) version. The bullets cannot be reflected, but will be absorbed by a reflector move.

SUIRYUU NAMI: Jazu throws a small tornado across the ground which expands and engulfs opponent in flames if it connects. The D version goes further but is a tad slower.

MIKADZUKI: Jazu slashes out a large projectile that covers almost the entire vertical screen area. I'm not sure if this can negate normal projectiles like in Kizuna Encounter. The projectile's hit area is smaller than it looks, and can be jumped over, though the initial slash can hit.

GOHTEN: yazu rolls forward with his claws extended. If it hits or is blocked, he rolls on top of opponent before leaping away. Move is SC-able.

MUDOU UTATA RIN TSUME: Jazu does an aerial version of the Gohten. This can only be done at the screen's edge, and has Jazu performing the Gohten diagonally downwards at a fairly steep angle. This leaves your opponent in hit stun for some reason allowing you to combo them afterwards.

YOUEN KEN: Jazu's tap+P move from Kizuna Encounter: he stabs forward repeatedly with his hands, covering his front with flames. This does more damage than the Youen Kyaku, but pushes opponent back with each hit. Unlike in Kizuna Encounter, this can no longer negate projectiles. Move is DC-able.

YOUEN KYAKU: Jazu's tap+K move from Kizuna Encounter. This is similar to the Youen Ken, except Jyazu kicks out instead. This juggles opponent repeatedy instead of pushing them back, but does noticably less damage than the Youen Ken. Move is DC-able.

SETSUMEI HASHIRA: Jyazu's DM from Kizuna Enounter: he crouches and summons 3 pairs of flame columns (think Terry's Triple Geyser, except it explodes in front and behind Jyazu). This is pretty slow to start, and there is some delay between each explosion, but does massive damage if all 3 sets managed to hit. The remaining columns won't appear if Jyazu was hit.

hcb+k, hcb+f+E (you get the idea, can probably fire bullets here too)