The King of Fighters XIV/Ryo Sakazaki 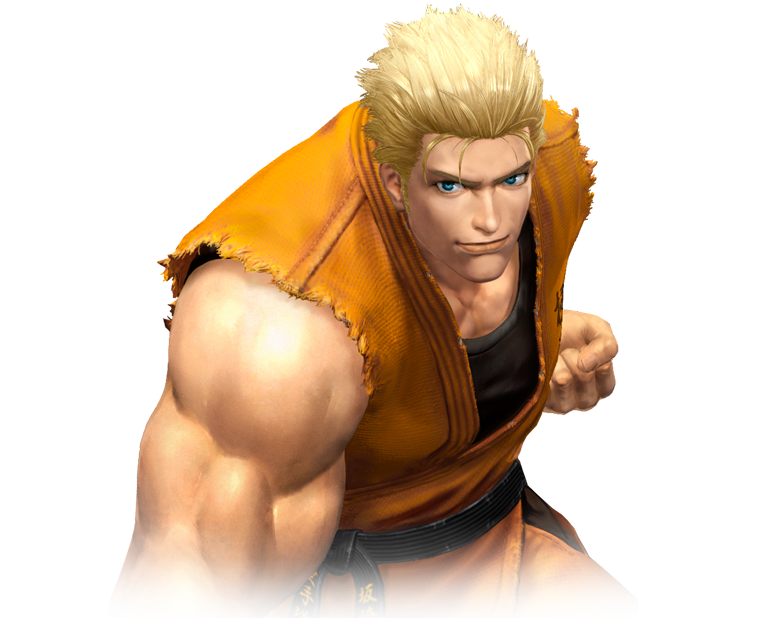 Ryo Sakazaki, much like the likes of Terry Bogard and Kyo Kusanagi, is one of SNK's most well-known protagonists and has been known as a KOF mainstay ever since the beginning; '94. As usual, Ryo essentially functions as a sort of "moving fortress", this much is clear due to how a large amount of his tools place emphasis on a more defensive method of approaching until some sort of close-range pressure or dominance is established against the opponent. Once one of the aforementioned close-range advantages is established Ryo is capable of using his abilities to their fullest, such "abilities" consist of a fairly notable cross-up, fast normals, many methods in which he can use to apply safe block-pressure with, and an effective albeit simplistic high-low mix-up game can all work in tandem to place Ryo within very advantageous situations. Due to how much of what makes Ryo "truly" potent relies on him being within close proximity of the opponent along with a somewhat slow walk and run speed makes it so that a large portion of playing the character to any effective extent consists of efficiently approaching. Successful approaches typically consist of controlling space with Ko-Ou Ken (which is still "viable" despite its notable downgrade in comparison to interpretations of the move present within games which released prior to XIV), mixing the use of running, walking, hopping and jumping appropriately, and potentially most importantly, using Ryo's unique Parry command-normals to circumvent any potential attempts to halt your approach that the opponent throws at you. Despite Ryo's approach-based downsides, if used effectively Ryo is capable of posing quite a threat to the vast majority (if not the entirety) of XIV's cast.

EX: An almost entirely invincible version of the Kouhou which almost travels the entire vertical length of the screen. Due to how this move can be linked into a combo from a Light Kouhou, this move is best utilized as a combo ender which doesn't elicit the usage of a DM.

EX: Comes out very quickly while moving Ryo forward, thus giving this move much greater range than either other version of the move. Launches upwards on hit, allowing for one to follow-up with EX Hien Shippu Kyaku and a Heav Hien Shippu Kyaku when in the corner and thus extends combos, making it a go-to extender from MAX conversions. Another interesting property of this move lies in just how safe on block it is, as it is so plus that one can force opponents into block "loops" that can easily lead to Guard Crushes when Ryo is played on Anchor. The only way to consistently escape these set-ups is with spending meter to use some form of Guard Cancel, allowing for the Ryo to attempt to predict such a movement and to punish accordingly.

EX: The EX version also primarily functions more as a combo starter or combo filler. It comes out quick, launches the opponent for further combo potential, and unlike the D version, will not whiff on crouching opponents. This move will primarily be used after landing an EX Ko-Ou Ken or as a starter to go into level 2 super assuming you have Ryo on point.

EX: Unlike the A and C versions, the EX version is actually one you’ll end up using a lot in the corner. It also launches the opponent in the air allowing for a C Kouhou follow up (corner only), but what makes it special is its “anywhere juggle” property which allows it to combo after things that don’t normally allow combos such as a stand normal reset or a non counter hit j. CD. This alone makes it a great combo filler.

Max: Functions the same as his regular super except it does more damage and travels at the same speed, if not slightly faster than the C version. Once again, it’s great for eating up projectiles to catch the opponent on a read, but its lack of varying speeds makes it very easy for the opponent to roll through. It also lacks use in combos since his other level 2 super is far better.

Max: Unlike the regular Ryuuko Ranbu, this super is incredible. It travels full screen, has many invincibility frames from its very start up, and has amazing damage ending with an unscaled 100 damage. With 2 bars, Ryo becomes very dangerous as one touch will lead into big damage and can also threaten any projectile attempts. Overall, a must use super if the meter is available.

( ^^^ Does not work on crouching opponents )