The King of Fighters XIV/Bandeiras Hattori 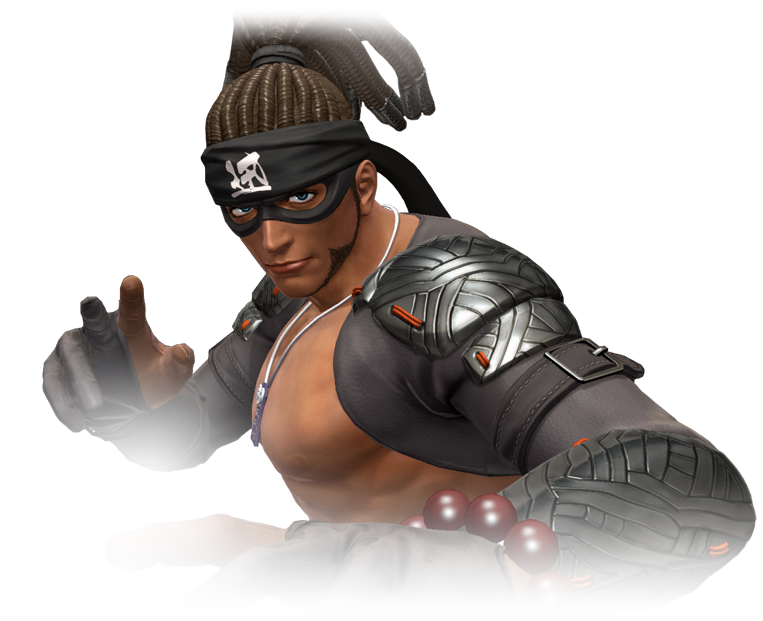 EX: has some more damage and slightly more frame advantage, you cannot EX the running version

EX: A VERY quick invincible teleport with barely any recovery, moves forward slightly less than B version. A great version to use for a mix-up while in Max mode.

EX: A safe version of that also results in a Hard Knockdown, switches sides on block, however the 2nd hit doesn’t connect in juggles so its very terrible for anything other than getting a side switch on block.

EX: Instant start up, Bandeiras now counters no matter where he was hit, and now tracks to the opponents location with the divekick, the kick no longer knocks down, but has enough hitstun for Bandeiras to combo directly after.

EX: A slightly faster version that launches higher than D version and is even +1 on block. Bandeiras’ main access to all of his damage.

Max: Great super to use as a combo ender, farther range and faster startup than lvl 1 and the final strike results in a Hard Knockdown. Works good in juggles, especially if you can get the final hit to connect.

Max: Bandeiras’ main super and is a HUGE source of his extended damage. Launches higher, hitbox is bigger and can hit as an anywhere juggle as well as still hit OTG* Also invulnerable through the hit and is still very unsafe.

(*OTG = off the ground, meaning it can hit the opponent while they’re knocked down)

A dp+K or hcf+B may be used after a cr. C reset for a position mixup:

Meterless 148 Damage - Ends in qcf+C. Hard Knockdown, cannot be followed up with OTG

EX: 358 Damage - Ends in level 2 Kama Itachi (qcfx2+AC) super, it knocks the opponent away instead of the usual crumple knockdown this super gets, leaving the opponent next to Bandeiras at the end. Hard Knockdown, cannot be followed up with OTG.

(Best midscreen combo route w 1 bar max. After the EX knee, Bandeiras goes past the opponent, and faces the opposite way for a moment, take a step or do a short run the direction he’s facing to realign yourself on the original side and have time to land the next hit, also be wary of the corner as it can mess up the combo)

(Strongest combo route for Bandeiras in max mode, do each part as fast as possible, any delay can cause the end to drop)

(Ends in a reset)

(non max midscreen confirm, timing is a bit tricky on end, but consistent)

(ends in a soft knockdown)

(ends in a reset)