The King of Fighters XIV/Xanadu 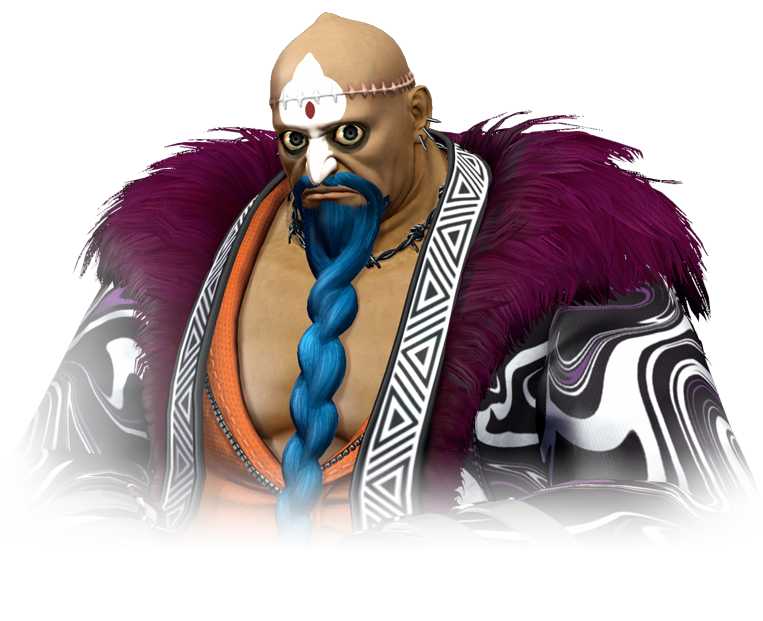 EX: Xanadu swipes 3 times, 60 damage on each hit before scaling. Has more invulnerability than the normal version. Xanadu also has a hitbox when he hits the ground again with this version (that hits low & doesn't combo), dealing 60 damage, but this won't connect if the first part of The Rapture connects.

EX: 113 damage. 10 hits at 15 damage per hit before scaling. This version has a fast startup and an extra bit goes beyond the initial shout. But doesn't connect if the initial shout connects. Deals a good amount of guard damage.

Max: More damage, performs 3 Rapture motions (with stomps that must be blocked crouching in between).

Meterless: Xanadu punches the opponent 3 times and ends with The Sorrow for a hard knockdown. 152 damage.

1 Meter: Xanadu punches the opponent 3 times and ends with his The Distress super for a hard knockdown. 218 damage.

EX: Xanadu punches the opponent 3 times and ends with his EX The Distress super for a hard knockdown, has to be started in Max mode. 353 damage.

Meterless punish combo. His f+A command normal whiffs on crouch for most of the cast, so don’t use this unless you know it’s going to hit by confirming off of a jump-in or punishing something.

Basic hitconfirm off of his cr.A. Hits crouchers. Can put a f+A after s.B for more damage if you confirm they aren’t crouching. Mostly safe as the qcb+A pushes you far enough outside of most punish ranges, but does leave the opponent at advantage on block. It spaces you perfectly to counterpoke with another s.B xx qcb+A though, so you can really bully some characters with this on block.

Super cancel from cr.A if you land it on a crouching opponent, just make sure you super cancel the qcb+A immediately. If it lands 2 hits, you’ll whiff the super and eat a huge punish.

Corner-only max mode combo. The timing is a bit odd; you have to do the cr.D very slightly late in order to get the qcb+A to connect at the end. Gives a hard knockdown, works at any team position. Hop D gives a safejump afterwards.

(place combo description here)Combo into his EX DM. Cancelling the qcb+C on the second hit instead of the third gives you max damage; if you cancel on the third hit the first hit of the super will whiff, but the rest will connect so you aren’t missing out on too much damage.

Again, omit the f+A if you confirm they are crouching.

Mid-screen max mode super combo, knocks them a fair distance away. Holding uf to jump immediately after, then hyper-hop D after landing gives you a 4f safejump if they were close to the corner.

Max mode into climax, less damage than above but his climax looks cool enough to do this one instead.

Xanadu has trouble with good zoning and strong pokes. His far heavy normals both have armour but not on startup; use them to poke through opposing normals and headbutt fireballs. Far D leaves you at advantage on block, but it pushes back so far it’s not easy to capitalize. It has great range though and makes a great poke, just be careful on spacing because it’s very slow on startup.

Xanadu’s main pressure game revolves around his far B. Landing it gives you a combo into qcb+A, and if they block the far B this is a true blockstring that is usually unpunishable by most of the cast. You can confirm the hit and super cancel the qcb+A for extra damage too. On block is where it gets interesting, though. After a blocked far B, you have several options: Cancel into qcb+A for pushback and chip damage, bullying your way to the corner where you can really put in pressure; Cancel into qcf+B for a natural frame-trap if they’re mashing anything non-invincible, and if they don’t mash anything and block the shout you’re left with a lot of frame advantage to continue your pressure; Cancel into hcb+K for a command grab mixup. This works much better in the corner where you don’t have to run as far for the grab. This is risky but makes them want to mash buttons if they get hit by it, which is when you can use option 2 to make them pay for it Use cr.A, cr.A, s.B to get this sequence going. If they’re in the corner, you can juggle off of shout with any of your normals. A good idea is to press A when it lands for an air reset, and you can cancel the A into command grab or another shout to catch them mashing.

Aside from that, Xanadu’s cr.B slides under non-grounded fireballs but doesn’t travel very far. It can be cancelled on hit or block into qcb+A or C for a surprise attack if you’re in range, and the slide itself hits low so you can try to catch them off-guard and cancel into qcb+C for damage. It also conveniently cancels into f+A. Although f+A whiffs on crouchers, if you’re hitting them low with the slide chances are they aren’t crouching. This is still a risk, as f+A is very punishable on whiff.

All of his supers, his command grab and his qcb+P special give hard knockdowns. An easy and effective mixup after landing qcb+P is to full jump D after a slight delay, which crosses up and combos into cr.A. If you hop, you’ll land in front instead. The hop is also a safe-jump on most of the cast if timed correctly, and the full jump crossup is a safe jump on characters with very slow reversals. Meaty shout is also a very good option after a hard knockdown to gain a ton of frame advantage and go for another mixup.