The King of Fighters XIV/Vice 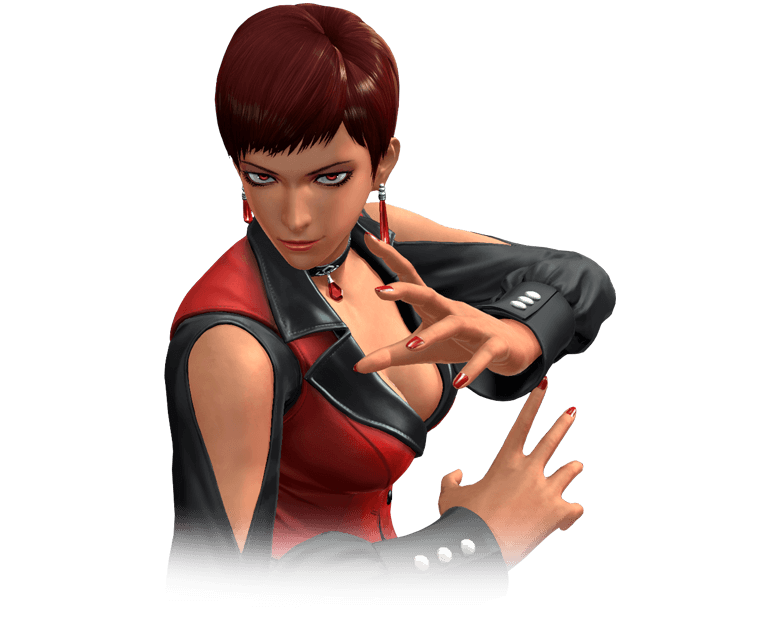 As with previous iterations, Vice mixes lengthy normals and specials with command grabs for a nasty guessing game anywhere midrange to close. In her signature special, Deicide, Vice stretches out her arm and pulls the opponent towards her if it connects. This provides a hard knockdown and good damage any time it connects, however it does no damage when it trades. She also sports the fastest dash in the game, and one of the quickest backdashes.

Vice has a slow jump, which is useful for keeping opponents back with jumping blowback attack, but not so much for hop mixups. Vice does not have much in terms of approach, so be cautious when going against a character with a strong fireball game. Regardless, when Vice controls the field she is a very rewarding character sporting high damage and incredible mixup.

EX: Anywhere juggle*. As slow as the D version and can link into a cl.D or cl.C.

EX: Does more damage and can be followed up with Obscura. Overkill will only connect in the corner. Nothing else connects.

EX: Has an even faster startup and will connect anywhere close up to a little less than C versions distance. The arch of her jump is a lot more horizontal and does not have any invulnerable frames.

EX: Launches your opponent higher and recovers faster. You can follow up with A Mayhem or even a normal attack.

Meterless: 169 dmg, 3 hits into gorefest. Actually kinda useful, except for the fact that the second and third hit of the rush combo are negative on block.

(A bit tougher to confirm than Mayhem, but leads to a better knockdown.)

(Same as above, but you sacrifice a little damage for a use-able knockdown.)

(Two variations of Deicide combos. hcf+D can still combo in Gorefest if you want the knockdown, but hcf+B can't combo into Mayhem.)

(If you find timing D version difficult, you can use B version instead. You can also whiff cancel a st.CD instead of the dash depending on the spacing.)

(I recommend getting the confirm off the j.CD down consistently. It can add to your air game significantly.)

(Input the half circles for both supers in the same direction, input before the next to last jump.)

(The climax input is hcfx2, but input it the same direction you did the super. Also the timing is very strict. Start buffering the notion after she slams them four times and remember to use the input buffer technique by holding the AC button down until it cancels)

This is a universal technique that can used with any character with a command grab. Since the first few frames of running are automatic, you can input a special during these frame and hold forward to continue running. In other words, to do this tech you need to input forward forward half circle back hold forward then press punch when you are close to the opponent. The input doesn't hold forever, so you need to practice to see the range you can reach with it.

It can be an important aspect of Vice's pressure game to make sure you punish the opponent's aerial approach hard. To that end, Vice has three powerful and unique options at her disposal: The air super, Overkill, Counterhit j.CD, and EX Deicide (i.e. the sleeve). Both Overkill and EX Deicide have a property known as Anywhere Juggle. When an opponent is hit in the air by a normal, they are put into a non-hittable state until they touch the ground. Anywhere Juggle ignores this state and allows additional followup.